Floods to drag up to 9 million Pakistanis into poverty: World Bank

The World Bank has predicted that the devastation caused by the recent floods in Pakistan are likely to increase national poverty rate by 2.5 to 4.0 percentage points, pushing 9 million people into poverty.

According to the World Bank’s October 2022 Pakistan Development Update: Inflation and the Poor, reversing these negative socio-economic effects is likely to take considerable time, and some losses, such as those to human capital and land productivity, can lead to more sustained declines in welfare and will warrant specific policy attention.

The report further predicts that Pakistan’s economy is expected to grow by only 2 percent in the current fiscal year ending June 2023.

According to the report, slower growth will reflect damages and disruptions caused by catastrophic floods, a tight monetary stance, high inflation, and a less conducive global environment. Recovery will be gradual, with real GDP growth projected to reach 3.2 percent in fiscal year 2024.

“Poverty in the hardest-hit regions will likely worsen in the context of the recent flooding. Preliminary estimates suggest that – without decisive relief and recovery efforts to help the poor – the national poverty rate may increase by 2.5 to 4 percentage points, pushing between 5.8 and 9 million people into poverty. Macroeconomic risks also remain high as Pakistan faces challenges associated with a large current account deficit, high public debt, and lower demand from its traditional export markets amid subdued global growth”. 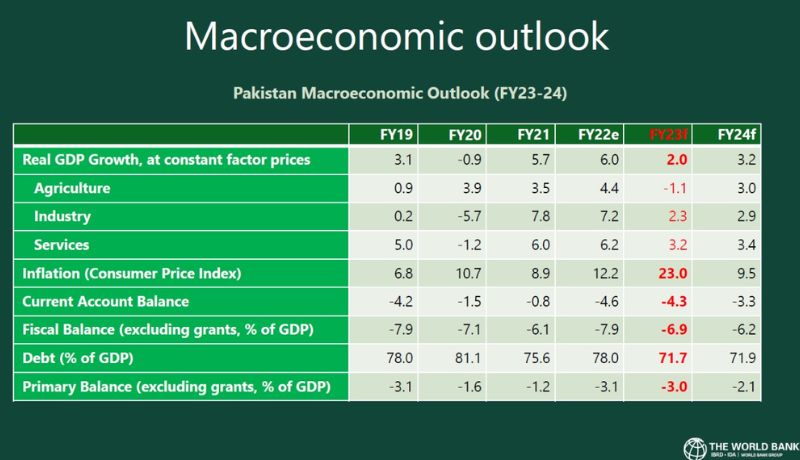 World Bank’s Country Director for Pakistan Najy Benhassine said that the recent floods are expected to have a substantial negative impact on Pakistan’s economy and on the poor, mostly through the disruption of agricultural production.

“The government must strike a balance in meeting extensive relief and recovery needs, while staying on track with overdue macroeconomic reforms. It will be more important than ever to carefully target relief to the poor, constrain the fiscal deficit within sustainable limits, maintain a tight monetary policy stance, ensure continued exchange rate flexibility, and make progress on critical structural reforms, especially those in the energy sector.”

The report also outlines potential strategies to manage the impacts of high inflation. Inflation in Pakistan is expected to reach around 23 percent in FY23, reflecting flood-related disruptions to the supply of food and other goods, higher energy prices, and difficult external conditions, including tighter global monetary conditions. The Update shows that the high inflation will disproportionately impact the poor.

“While relief measures are needed to cushion the impacts of flooding, it will be critical to ensure that these are targeted towards those most in need,” said Derek HC Chen, author of the report.

“Pakistan has previously resorted to energy subsidies, but our analysis shows that such measures disproportionately benefit better-off households, while imposing unsustainable fiscal costs. Going forward, the priority should be to tame inflation through sound macroeconomic policies”.

It further said that these should be accompanied by measures to provide targeted relief to those hit hardest by rising prices, including through expanded social protection programs, and to address the distortions that discourage trade and productivity.

Power supply to Karachi will be restored by evening’

PM Imran urges nation to stand with the good against evil