Pakistani former cricketer Shoaib Akhtar has been appointed as the Ambassador for the Motorway Police of Pakistan.

The fastest bowler in the history of international cricket took to Twitter and Instagram to announce the news and shared how he plans to play his part as an ambassador for the Motorway Police of Pakistan.

“Proud to be associated with Motorway Police of Pakistan as an ambassador. Will InshAllah play my part in creating awareness about road safety & inform people about traffic laws,” said Shoaib Akhtar in a Tweet and in an Instagram post on Tuesday.

The former bowler, nicknamed Rawalpindi Express, posted 2 pictures and captioned the images with his statement and a couple of hashtags.
Fans expressed their joy over the news and congratulated Shoaib Akhter by commenting on his post. Among the first ones to comment was the Omani cricketer, Sufyan Mehmood, who commented, “Kia Baat hai sir ji,” with a heart emoticon. 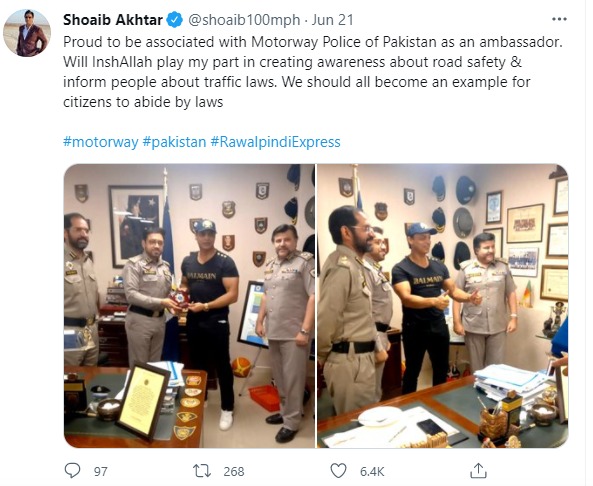