Considering the way 2021 ended, especially the last few months of the year, 2022 does not promise a very positive outlook. And this holds true for politics, the economy, foreign policy and governance. Since coming into power, Imran Khan and his government have been struggling, going from one crisis to another. But then there was hope — hope of an economic turnaround, prices coming down, employment generation, improved governance and strengthening of the provincial governments in Punjab and KP. More than anyone, Prime Minister Imran Khan was very optimistic about better days ahead, but with recent events such as the spectacular loss in the KP local government elections, which till now was considered the PTI’s citadel of political power, maybe, just maybe, the PM is losing hope as well. That all is not well is clear from the Prime Minister’s decision to dissolve PTI’s organisational structure and his announcement that he will personally oversee the second phase of elections in KP, as well as the elections in Punjab.

If the PTI’s disastrous performance in the KP local government elections is the reason for the PM to decide to oversee the next phase of elections, then he will have to oversee and directly manage every other aspect of national affairs — be it politics, governance, economy or foreign policy, because the failure is evident on all fronts. As a former cricket captain, the PM should know better than anyone that it is not just about overseeing everything that guarantees positive results. You need a world class team to support you and there is enough evidence to suggest that the PM unfortunately lacks a strong, competent and professional team. In fact, the team at his disposal is incompetent and lacks capacity.

Coming back to politics, we need to examine how it looks going into 2022, which many people believe will be the year of elections. Before we proceed further, it is worth recalling that the KP local government elections were not the only one which resulted in a massive defeat for the ruling party. This has been a familiar pattern all through 2021. Except for Sialkot, the PTI lost all the by-elections in Punjab, including the one in South Punjab. It lost from Nowshera, its power base and the hometown of Pervez Khattak. It not only failed to retain its seat in Karachi (vacated by Faisal Vawda) but its candidate placed fifth in the seat rankings out of six contenders. It also lost the cantonment board elections, and saw virtual decimation in key cantonments, such as Rawalpindi and Lahore.

So with its political support shrinking all across Pakistan, how can the party regain lost ground? The only way that can happen in 2022 is a much-improved performance on all fronts — what people expected when Imran Khan came to power based on promises made before Elections 2018. This was a political party coming into power not just on the promise of economic improvement, but the promise to dismantle in entirety the old, rotten Pakistan and create in its place a ‘Naya Pakistan’ — along the lines of the golden period of Islamic history, the Riyasat e Madina. It was the dream of a disparity-free Pakistan that the Captain committed to, in front of large excited gatherings. It was not just about economics. He vowed there would be no VIP protocol, no Governors Houses and no PMs-house. But none of this has happened in more than the three years of the PTI government and that is why there is such a loss of hope as we enter the new year.

And with the likes of Usman Buzdar and Mahmood Khan at the helm in their respective provinces, even PTI diehards would find it difficult to hope for a better and improved performance in 2022. Three-and-a-half years is enough to determine the capacity and quality of the appointed team leaders in the country’s provinces. The unfortunate fact is that performance is expected to deteriorate as fatigue sets in — the signs of which are already very evident. The same is true of the federal cabinet. From the first day of the new government, it was clear the selection was extremely poor with most cabinet ministers lacking in quality, capacity and professionalism.

It’s even worse as far as the economy is concerned. The biggest challenge is the high inflation that has persisted since the present government came to power. Its inability to control price hikes, especially of essential items, remains its biggest failure to date. Under IMF pressure, the mini budget with nearly 400 billion rupees of additional taxes, will certainly result in more price increases. Inflationary pressures will continue their upward journey in 2022 seriously affecting the budgets of large segments of the population and further eroding the PTI’s popularity. Additionally, unemployment is expected to increase significantly and more people are expected to go below the poverty line.

The government is also struggling to control the fiscal deficit as well as the trade and current account deficits. As a result, the pressure on the rupee will continue to mount in the new year, with the rupee expected to hit the 200 mark somewhere around mid-2022. And the stock market remained dull throughout 2021 with negative dollar growth. The trend is expected to continue in 2022.

In order to control inflationary pressures, the State Bank will continue to increase the discount rate in the first half of 2022. With higher interest rates and a higher fiscal deficit, the public debt will reach levels unimaginable a few years ago.

With Imran Khan’s popularity hitting a new low, coupled with worsening economic conditions, the scenario for 2022 looks pretty grim for the ruling party. Whether it will come out of this difficult phase will also depend on several other factors. These include global trends, primarily international commodity prices, and the overall COVID situation. Easing of international commodity prices, including oil prices, could give the government much-needed fiscal space and the capacity to control prices.

Another major factor that will determine how the year 2022 shapes is the role of the opposition. The combined opposition under the PDM more or less failed in its effort to dislodge the government. By June 2021, it looked as if the government had been able to convincingly repel the onslaught. But since then the opposition has had several opportunities to find its way back into mustering a formidable enough force to exert maximum pressure on the government — both in the Parliament as well as on the roads. This will further weaken the government’s resolve to manage the challenges that it faces in 2022.

The opposition, especially the PML-N, has managed to overcome what many saw to be a witch-hunt — conducted over the last three years in the name of accountability —  and it’s no less than a miracle in the Pakistani political context that the party has remained almost intact. 2022 will start with not a single PML-N leader behind bars. And further relief is also in sight for the main opposition leadership as the government’s accountability narrative all but fails. That failure, in fact, makes the opposition look far more aggressive and ready to take on the government like never before.

The big question is whether the PTI government will be able to get through 2022 without hurting itself further. The past-three-and-a-half years have clearly demonstrated that the present ruling party does not have what it takes to govern a complex country like Pakistan. That is why there is a general belief among independent political analysts that Imran Khan, fearing the worst, could surprise everyone by dissolving the assemblies and calling for early elections. This might prove disastrous for him given the fact that the momentum against the ruling party mounts each day. The only other option — crawling its way through 2022,  hoping against hope for support from unspecified forces and a revival of fortunes — seems remote. Meanwhile, the party seems to be on its way to further disintegration.

One thing is for sure — 2022 will be full of excitement — many fireworks and breaking news — with the political temperature constantly rising. And while the parties fight it out, the public will be watching in despair, because for them little changes, whoever is at the helm. 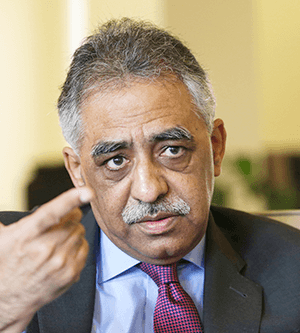 Mohammed Zubairhttp://narratives.com.pk
The writer is former Governor Sindh and the spokesperson of former premier Nawaz Sharif and his daughter Maryam Nawaz.

From Bad to Worse?