From Bad to Worse?

Forecasting the economic outlook is always a challenging task; more so for a country like Pakistan. Political stability is a key fundamental in order to ensure a sustainable economic performance. And right now, as we enter a new decade, Pakistan is in the grip of serious political uncertainty.

Therefore, predicting the economic outlook in an uncertain political environment is extremely difficult — if not impossible.
So before I attempt an assessment for 2021, let’s examine where we stand today in terms of the country’s economic situation. Based on pure economic indicators, perhaps the last year was one of the worst in our history. There could be many reasons for failure, and politicians and economists will disagree about these reasons, but the fact is that Pakistan had negative GDP growth in the last fiscal year — for only the second time in our history. In spite of Pakistan’s traumatic political history, which has seen four military interventions, several governments dismissed for various reasons, several wars and the breakup of the country, we never had negative growth. The government will inevitably attribute at least part of the negative growth to COVID-19, but that hit Pakistan towards March end 2020. So the first nine months of the fiscal year were not impacted by Covid at all. In fact, the economy has been in a downward spiral since August 2018 — as the results of the first fiscal year under the PTI government would confirm.

As we go into the next year, the economy remains in a state of depression. Inflation, poverty and unemployment continue to show negative trends. Tax collection has remained almost stagnant over the last two years. This in spite of high inflation, which helps boost tax collection regardless of economic growth. The overall size of the economy has shrunk significantly, from around 315 billion US dollars in mid-2018 to around 260 billion within two years. That has naturally resulted in a major fall of the GDP per capita, reflecting an erosion in the purchasing power of common Pakistanis.

With these macro indicators, the government faces serious challenges in order to turn the economy around in the coming year. The economic turnaround will largely depend on the following factors:

All the above factors are important for economic revival, but none more than the first one — the economic policies and overall governance and performance of key ministers. This is where the present government has been lacking. The government has mostly blamed others for its own poor performance — previous governments, mafias, the bureaucracy, opposition political parties, etc. — failing to address the main issue. The government has to start looking inwards — most importantly its poor decision-making process. The sugar crisis was the result of poor decisions — or the lack of decisions — that resulted in supply constraints which then led to price escalation. The Prime Minister’s acknowledgement that there was a delay in the decision to import wheat, which created supply/demand constraints, reflects poor decision-making. The oil crises was also a result of the serious lack of timely decisions, or just poor decisions.

These are just a few examples. The government has faced one crisis after another over the past two years, most of them of its own making. Two things are evident. First that the party in power had no understanding of the complex issues facing the country and that explains the poor planning before coming into power. The second was the poor composition of the PTI team. Its supporters thought PTI had the best team, who would convert the dream of Naya Pakistan into reality. Among them was the man considered a key economic game-changer: Asad Umar. But within eight months he was shown the door.

Pakistan badly needs the reactivation of the IMF programme which would bind the government to undertake structural reforms in key areas such as taxation, energy, privatisation and others.

The government has to stop looking for scapegoats, and only then would its performance have a chance to improve. Unless there is ownership of responsibilities, there can be no improvement. The PM must understand that the time is long gone to blame others for its government’s failures.

Tax collection must improve, or at least match the 20 percent annual growth delivered over five years by the previous government. Inflation must be brought down and that requires an improvement in the supply chain as well as the quality of fiscal and monetary policies. Just blaming mafias won’t do anymore.

In a recent interview, the PM acknowledged that his team began unprepared to handle the task that faced them, and conceded that at least for the first several months of his tenure they had no clue about the gigantic issues confronting the country. Whatever the case may be, the performance of the government will need a real uplift in order for the economy to improve in 2021.

The IMF programme has remained suspended since the outbreak of Covid. Pakistan badly needs the reactivation of the IMF programme which would bind the government to undertake structural reforms in key areas such as taxation, energy, privatisation and others. These reforms are sorely needed for long-term economic growth. So far the government’s reform agenda has taken a backseat, with no improvement in sight. As a result, the state institutions are dysfunctional in most cases.

The largest portion of our import bill relates to oil. Pakistan annually spends about 14-15 billion dollars on the import of oil. This year was exceptional due to the pandemic, which saw a plummeting of demand. International oil prices directly affect our economy. As such, any significant increase from the present levels would negatively impact our plans for economic revival.

That could take several months. Even if the government survives the present campaign of the opposition, it will certainly affect economic activity in the country negatively.

Perhaps, one of the more important factors for economic turnaround in 2021 will be the overall political situation. Economic growth will continue to suffer due to political uncertainty in the country. The opposition has announced its intention to remove the government. That will mean unrest in the country, including possible disruptions, arrests and a standoff between the law enforcement agencies and the opposition. Already the business community is nervous as the political temperature rises. Potential investors would like to wait and see and hold back their investments until the political situation becomes clear. That could take several months. Even if the government survives the present campaign of the opposition, it will certainly affect economic activity in the country negatively.

Regional peace and stability are essential for long-term economic growth. No country in the world can afford a hostile environment with its neighbours and Pakistan is no exception. What happens in Afghanistan is crucial to our economic development. The same is true for India. Relations with India have remained tense with regular border conflicts. Tense relations with Afghanistan and India will severely impact our economy. Therefore, the importance of an improved working relationship.

Based on the above cited factors, 2021 might well be even more challenging than 2020. Most economic indicators will remain under serious pressure. We might see improvement in certain areas, but inflation will continue to remain high. In addition, unemployment will continue to rise and more people will fall below the poverty line in the coming year. GDP growth will not go beyond 1.5 — 2 percent, which is far below what Pakistan needs. Exports might show some improvement, but again, a single digit growth means not much to strengthen our balance of payments situation.

Overall there isn’t much to look forward to with regard to the economic standpoint in 2021. And that’s far from encouraging. 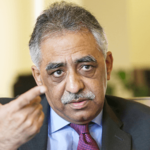 The writer is former Governor Sindh and the spokesperson of former premier Nawaz Sharif and his daughter Maryam Nawaz.
Perspective