To March or Not to March

Marching on 8th March for women’s rights has been a global annual occurrence for 166 years; in Pakistan for 75 years; and in the federal capital Islamabad for over four decades now.

Our slogans are many and diverse: 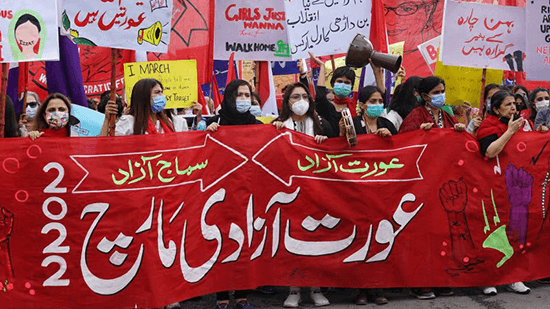 Whether under 34 years of military dictatorship regimes and juntas, or under civilian, ostensibly ‘democratic’ dispensations, we have continued marching on International Women’s Day (IWD), overcoming all obstacles, hindrances, threats and attacks on us.

And since February 12, 1983, we also observe Pakistani Women’s Day annually. This is to commemorate that momentous landmark event in Lahore, when, at the height of General Ziaul Haq’s brutal military regime (1977-88), a group of brave members of the Women’s Action Forum (WAF) and Punjab Women Lawyers Association (PWLA), protesting the draft Evidence law (Qanun-e-Shahadat) were physically attacked, injured, arrested and jailed. It was reported worldwide. The general subsequently promulgated a much watered down version of that infamous law via presidential ordinance, i.e. not enacted legally by an elected Parliament.

But all Ziaul Haq’s brutal repression and censorship could not stop us from marching, demonstrating, rallying, protesting, awareness-raising, advocacy, conscientisation, speaking and writing. Neither could subsequent hostile autocratic civilian governments, along with their bureaucratic administration henchmen and LEAs at their command.

Over the past four decades, we have never let direct/indirect threats, and even physical attacks from extremist theocratic entities deter us, whether religio-political parties in Parliament, or militant terrorist groups outside, or coalition partners in government. Women’s rights activists have never stopped celebrating IWD – even when there was nothing to celebrate.

Since 2018, there is a younger cohort of feminist activists, teaming up to observe IWD with their senior predecessors, such as WAF, Tehrik-e-Niswan, Aurat Foundation, Shirkat Gah and others. Called the Aurat (woman) March, it has drawn an unprecedented number of younger women, men and TGI/NB-persons into the fold – and has spread to secondary cities and towns countrywide – including Balochistan.

Our IWD marches have always remained peaceful, no matter how intense the provocation. However, religio-political parties/groups do not play fair. In fact, they play dirty and deadly games. They physically attacked us in 2020. In 2021, they lodged FIRs against selected members of the Aurat March organising committee on false, fabricated charges of blasphemy, via a doctored video posted online – which, if proved and convicted by a court, would carry a mandatory death sentence, again under a law illegally changed by the military dictator Gen Ziaul Haq via an ordinance, minus an elected Parliament. 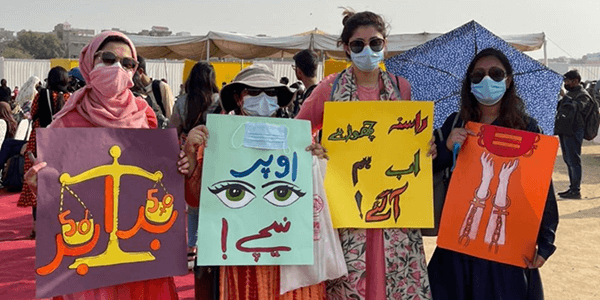 The sad irony is that while Zia was eliminated 34 years ago, he indemnified himself and his unconstitutionally promulgated ‘laws’ via his illegal 8th Constitutional Amendment (CA, 1985). They are still operative. No civilian political party subsequently in power under an ostensibly ‘democratic’ dispensation, has mustered the required will or courage of its convictions to repeal the 8th CA, in order to restore the 1973 Constitution to the status quo ante. Zia is long gone, but retrogressive Ziaism is still alive and kicking.

It was demonstrated yet again in February 2022, when then-sitting federal minister for religious affairs in the recently-ousted PTI government of ex-PM Imran Khan, wrote a publicly released letter to his PM, saying that since the traditional annual IWD marches and rallies are “obscene (bay-hayaa), with vulgar (fahaash), immoral sloganeering, banners and placards” (sic), thus the PM should: ban them countrywide; declare 8th March as “Hayaa and Hijaab” (women’s modesty and enforced veiling) Day; and order mandatory Hayaa marches to be held everywhere, in place of Aurat Marches, countrywide.

To be fair, two of the then-sitting PTI federal ministers (human rights and information) disagreed with their cabinet colleague – also publicly, via social media. Thus, it is obvious that the PTI government was not a monolith. In fact, it was a house divided within.

In Islamabad, religio-political parties, including JUI-F and TLP, extremist groups and terrorist outfits like Jamia Hafsa-Laal Masjid and others of that ilk, went on the offensive well before March 8. They declared the Aurat March as being ‘unIslamic’, immoral, obscene and vulgar. They threatened to physically attack anyone who dared to organise or participate in it. Then-federal interior minister, the LEAs, and Islamabad Capital Territory (ICT) Administration took no pre-emptive measures to prevent a repeat of the 2020 violence against peaceful, unarmed IWD marchers by radical theocratic entities.

The women’s wing of the much less radical Jamaat-e-Islami (JI) political party announced they would observe March 8 as “Tahaffuz-e-Niswan” (women’s protection) Day, and marched peacefully in several cities. Police provided protection to large Aurat March events in Karachi and Lahore.

In Islamabad, the Aurat March was organised by young women members of the leftist political party AWP-WDF for four years (2018-2021). In 2022 they decided not to organise it, in view of the mullahs’ attack in 2020 and the violent fallout in 2021. So an informal group of feminists and rights activists came together to organise Islamabad’s March 8, 2022, IWD event, in order to continue our four-decade old tradition.

As always, a formal application was sent to the ICT Administration (ICTA), requesting (a) the required No-Objection Certificate (NOC), and (b) police protection, in light of the events of 2020-2021, as well as overt public threats of violence from the religious right.

Despite continued follow-up with ICTA and senior police officials, no NOC was issued by the PTI government, nor were we assured of protection against the threatened attacks. On the contrary, senior bureaucrats and police officials constantly pressurised us – insisting that we should cancel our planned rally and march from the Press Club to D-Chowk.

On March 7 we petitioned the Islamabad High Court, but got no relief and no orders to ICTA to issue the requested NOC and to provide us police protection.

Hence, we prepared for the worst – along with contingency plans. When we showed up at the Press Club ground, we discovered that the LEAs-ICTA had sealed and cordoned it off on all sides with huge containers, with just a small pedestrian path available.

Naturally, only a miniscule hardcore of committed enthusiasts eventually arrived. The rest were either intimidated and decided not to participate, or tried to reach the starting point but turned back on seeing huge containers sealing off the venue. Another sad deterrent factor for potential participants, was the rift occurring within the original Aurat March organisers from the AWP-WDF political party. But that is a whole different, separate discussion – better left for another day.

As per the published programme, we started marching towards D-Chowk for our main event, but a contingent of LEAs materialised at the F-6 markaz junction, blocked our path and forcibly prevented us from marching any further, due to “groups of mullahs already heading in our direction, using the same route, and planning to converge exactly at the same spot.” We could actually see two of the four mullah groups at a distance of around 150 metres, marching towards us, carrying large flagsticks.

A very senior police officer (name/rank being withheld) became extremely aggressive, informing us that their intelligence was predicting a violent armed confrontation (albeit one-sided as we were unarmed), and the LEAs-ICTA would not be responsible for any loss of life or injury. Our event came to a sudden abrupt end at 2.30pm, after iconic feminist author Kishwar Naheed recited her rousing poems, with the LEAs forcibly dispersing us on Aga Khan Road, in full view of the mullah marchers.

We question ICTA’s and LEAs’ refusal to disperse the rabid mullah contingents, or to try to persuade THEM not to schedule their event in conflict with ours, which we announced long before theirs. We also know that the mullahs did not apply for an NOC or police protection for their publicly announced event. It would be really instructive to know who is backing them – since no one was backing or funding us.

We wonder: what happened to the rule of law across the board? And to the reason for the existence of laws and measures pertaining to the Maintenance of Public Order (MPO)? Or is only the Religious Right in the right, and is the Left always wrong, unpatriotic, seditious, treasonous – and now blasphemous too?

It was ironic that, despite withholding the NOC, yet ICTA-LEAs actually instructed us not to voice this particular slogan, since it has become such a red rag to the fundo-bull over the past four years of annual IWD Aurat Marches. It goes without saying that, in keeping with our traditions of four decades, we chose to defy the PTI government this year too – especially since they refused to provide us the requested NOC and police protection.

We remain defiantly committed to claiming and reclaiming our public space. We have defied all hurdles and have sent a clear message to all patriarchal extremist forces that women’s place is in the Resistance: “8 March ko march toh hoga”

The print, electronic and digital media were present in huge numbers. We heard taunts about our numbers. Our response: what we lack in numeric strength, we make up for, in our energy, zeal and passionately sustained commitment to all our causes and rights-based activism.

Our marches and rallies have always been peaceful – and remain so. We do not respond in kind to actual physical attacks, or threats of violent attacks, e.g. “women like you are just asking to be raped” was the gist of what a sitting male senator of a retrogressive mainstream religio-political party said to a woman human rights activist on a television talk show, while physically intimidating her. We choose the high moral ground instead. Also, despite the clear and present danger, we remain brave and fearless in our ongoing struggle, in the face of daunting odds.

Responding to those who objected to our “lakh laanat” (a hundred thousand curses) slogan against our enemies: be thankful we refrained – and have always refrained – from using their women-centric gutter language. Our language remains generic, non-sex-specific.

We remain defiantly committed to claiming and reclaiming our public space. We have defied all hurdles and have sent a clear message to all patriarchal extremist forces that women’s place is in the Resistance: “8 March ko march toh hoga” (we will continue marching on March 8).

Our foremothers would have been so proud of us – a handful of old women, along with a sprinkling of the younger generation of women, men, TGI-NB persons, students and activists who were brave enough to show up on March 8, 2022 in Islamabad. It took personal courage, raw guts and commitment – especially in the young – in the face of well-publicised credible, concrete, serious threats we continued receiving from diverse mullah groups; and the severe obstacles from the PTI government and ICTA-LEAs.

In the end, it may remain a bit hazy as to who called whose bluff in Islamabad on March 8, 2022, but what is crystal clear is that we, Pakistani women, are no longer to be repressed, cowed down, silenced, invisibilised, or forced to knuckle under. We stand up, speak out loud and clear, demonstrate, rally, and keep on marching for our rights and freedoms. Our peaceful struggle continues.

An extract from “Still I rise” 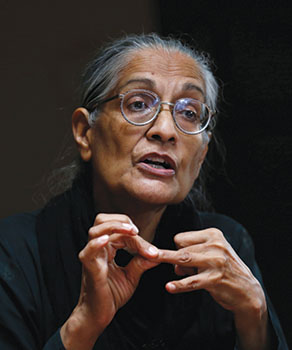