Sikhs are followers of a monotheistic religion — Sikhism — that originated in the 15th century in the Punjab region of the Indian subcontinent. When studying the Sikh’s sacred scriptures, such as Adi Granth or Dasam Granth, one finds references to Hindus and Muslims that convey one message: that of the unity of mankind under one God.

One of the most forceful expressions of this irenic belief is to be found in a famous passage of the Dasam Granth: “Some are called Hindus, others are Muslims, members of sects such as Shia or Sunni. Let it be known that mankind is one, that all men belong to a single humanity. So too with God, whom Hindu and Muslim distinguish with differing names. Let none be misled, for God is but one; he who denies this is duped and deluded.”

The Sikhs participated in the decade-long Indian freedom movement against colonial rule, along with Hindus and Muslims, in the first half of the 20th century. In 1920, the Akali Dal was founded as the political representative of the community under its leader Tara Singh. Singh strongly opposed the partition of India and campaigned for the recognition of Sikhs as the third community. The months leading up to the 1947 partition of India, were marked by a tussle between the Indian National Congress (INC), led by Jawaharlal Nehru, and the Muslim League, led by Quaid-e-Azam Muhammad Ali Jinnah, for the support of the Sikhs in the negotiations on the drawing of partition lines. Nehru is on record as having promised a Sikh state, probably within the Indian Federation, in return for Sikh political support during the negotiations. 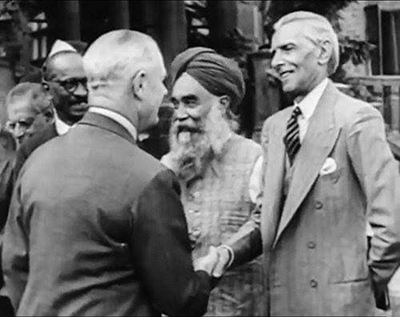 On behalf of the Muslim League, the Quaid offered very generous terms to the Sikhs (Master Tara Singh, the Maharaja of Patiala and others) to dissuade them from demanding the partition of Punjab, if India was partitioned. He offered a Sikh state that would be independent and comprise unpartitioned Punjab minus one or two southern districts. Traditionally closer to the Congress, the Sikh leaders did not take up this offer, one factor being their apprehension that Pakistan would not follow through on the plan in case of the Quaid’s demise. This offer throws interesting light on Quaid-e-Azam’s ideas about Partition and his vision regarding the future of the subcontinent. In fact, just months before Partition, he had agreed to the suggestion of Fazlul Haq and Suhrawardy for an independent Bengal, comprising undivided Bengal and Assam. In his policy statement as President of the All-India Muslim League on June 17, July 11 and again on July 30, 1947, the Quaid stated that Indian princely states had every right to declare independence, in addition to their right to join India or Pakistan. That kept the option for an independent Kashmir open. Just imagine a subcontinent with Pakistan, Kashmir, Punjab and Bengal. Such a vision put the Quaid much ahead of his time. Missing this historic opportunity is now rumoured to be a cause of regret among a substantial number of Sikhs. The 1960s saw growing animosity between the Hindus and Sikhs because of the Sikh demand for the creation of a Punjabi state on a linguistic basis, along the lines of other states in India. To partially fulfil the Sikh demands, Chandigarh was made a union territory in 1966 as the capital of both Punjab and Haryana. However, that did not appease the Sikhs. 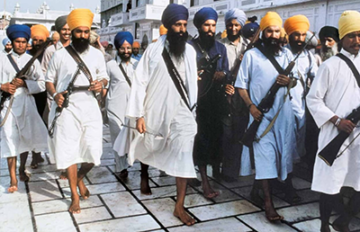 Sikh leader Jarnail Singh Bhindranwale, who was initially supported by Congress leader Sanjay Gandhi, eventually triggered an armed struggle for a fully autonomous Punjab.  Earlier, in November 1982, the Soviet Union leader (and former Head of KGB), Yuri Andropov, approved fabrication of Pakistani intelligence documents detailing ISI plans to create an independent Sikh state. This disinformation, including the purported secret CIA support for the Sikhs, was taken seriously by Indira Gandhi. When the negotiations with the militants failed, the Indian PM ordered the launching of ‘Operation Blue Star’ to rid the well-fortified Golden Temple of militants, led by Jarnail Singh Bhindranwale, Amrit Singh and retired Maj. Gen. Shabeg Singh.  Simultaneously, the troops were ordered to clear out militants from dozens of Sikh temples across Punjab.

Lasting from June 1 to June 10, 1984, the actual assault began on June 3, 1984. The army gained control of the Golden Temple, which was fiercely defended by the Sikhs, after a 40-hour firefight. The official casualty figures of the army were 83 soldiers dead and 249 injured; however, in September 1984, Rajiv Gandhi disclosed that 700 soldiers were killed. What remains a mystery to this day is, why did the Indian Army permit 3000 pilgrims to enter the Golden Temple on the day of the martyrdom of Guru Arjan, the founder of the Harmandir Sahib (Golden Temple), and then seal it off. Several hundred people lost their lives in the attack.  There is widespread suspicion among the Sikhs that the Indian Army did this to inflict maximum civilian casualties and thus demoralise the Sikhs. Operation Blue Star had far-reaching consequences, and one of them was the tragic assassination of then Indian prime minister Indira Gandhi in 1984, by her own trusted Sikh bodyguards. Nearly 3000 Sikhs were estimated to be killed in the subsequent anti-Sikh riots in Delhi.  Sikh soldiers across India mutinied; several were killed and nearly 3000 soldiers were court-martialled.  Dozens of Sikh officers resigned from the Indian armed forces.

In 1985, the Indian Government attempted to seek a political solution to the grievances of the Sikhs through the Rajiv-Longowal Accord signed by then Prime Minister of India, Rajiv Gandhi, and the Akali Dal leader of Punjab, Harchand Singh Longowal. The Accord accepted the religious, territorial, and economic demands of the Sikhs that were considered non-negotiable in Indira Gandhi’s tenure and agreed to establish commissions and independent tribunals in order to resolve the Chandigarh issue — whether it was to be handed to Punjab or Haryana — and the dispute between Punjab, Haryana and other states over the sharing of water from the Ravi-Beas system. This led to the Akali Dal’s victory in the subsequent elections. However, not all Sikhs accepted the truce. There was opposition from several orthodox leaders, as well as some politicians of Haryana. In fact, Longowal was assassinated by militants opposed to the accord.

Rumours abound that during Rajiv Gandhi’s visit to Pakistan, Benazir Bhutto sought to appease him by instructing the then Interior Minister, Aitzaz Ahsan, to hand over the list of the Sikh militants involved in the Khalistan movement hiding in Pakistan to the Indians. And even though Aitzaz Ahsan has denied it, rumours still persist, especially among intelligence circles. By the early 1990s, Indian security forces had managed to suppress Sikh insurgents, who were behind the indiscriminate attacks designed to cause extensive civilian casualties, such as the derailing of trains, and exploding of bombs in markets, restaurants, and other civilian areas between Delhi and Punjab. As a result, Hindus left Punjab by the thousands. The insurgents even assassinated many of those moderate Sikh leaders who opposed them, and sometimes killed rivals within the same militant group.

The demand for Khalistan has not died down to this day. Recent reports indicate a rise in pro-Khalistan sentiment among the Sikh diaspora overseas; they are determined to revive the secessionist movement. During the Cricket World Cup in 2019, some people were even spotted in pro-Khalistan jerseys, but they were whisked out of the stadium by security.

Following RSS chief Mohan Bhagwat’s speech on Dussehra in 2019, in which he said, India is a Hindu nation, Sikh community leaders such as Giani Harpreet Singh, the Akal Takht jathedar (head of the Takht or authoritative seat), and Gobind Singh Longowal reacted sharply. Objecting to Bhagwat’s remark, Giani Harpreet Singh said: “When we oppose the RSS, we are not opposing the Hindus; this should be clearly understood. The RSS can preach Hinduism; we have no problem with that. But they should stop defining Sikhism. Sikhs have many institutions to decide who they are. We don’t want outsiders to tell us who we are… We are not part of the Hindu nation of the RSS.”

In Pakistan, where the Sikhs comprise a small minority, they have had their share of problems with Muslims. This may have to do with the horrible memories of Partition in Punjab and also because of Pakistan’s failure to provide the necessary security, acceptance and comfort to the Sikhs, despite the firm determination of the Quaid to protect the minorities. Fortunately, the situation has improved over the years; many Sikh places of worship located in Pakistan are now very well maintained, The credit goes to a former DG, ISI and diehard Islamist, Lt. Gen. (R) Javed Nasir, who was at one point, Chairman, Evacuee Trust Property Board. Consecutive Pakistani governments have allowed Indian Sikhs access to their places of worship on the occasion of Sikh holidays. 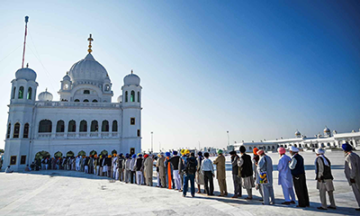 With the restoration of the religious Sikh site in Kartarpur and the opening of the Kartarpur Corridor which allows all Indian Sikhs almost unrestricted access to Gurdwara Darbar Sahib, the last resting place of Guru Nanak, Pakistan has shown a marked change in its attitude towards the Indian Sikhs. However, India has not reciprocated this gesture so far: Pakistani Sikhs are not allowed to use the border-crossing and hence, cannot access Dera Baba Nanak on the Indian side without first obtaining an Indian visa.

With the fascist BJP ruling the country, Pakistan cannot expect any real progress in its relations with India. In fact, India’s National Security Advisor (NSA), Ajit Kumar Doval, and others openly talk about breaking up Pakistan by fomenting trouble in Balochistan and elsewhere, repeatedly and vociferously, as do some of their reputed TV anchors.

Instead of fishing in Pakistan’s “troubled waters,” perhaps India should be taking a cold, hard look at its own backyard, where several insurgencies are underway — and I am not talking about Kashmir.

The Sikhs have been demanding their own separate homeland, Khalistan, long before Partition. The separatist movement gathered momentum in the 1980s. With financial and political support from the Sikh diaspora in Canada, Italy and the UK, the movement gained force in the Indian State of Punjab in the ’70s and reached its pinnacle in the ’80s. However, it received a setback after Operation Bluestar and the subsequent crackdown on the separatists. But the movement refuses to die down.

While the Indian government foments trouble in Balochistan and other parts of Pakistan, it has the gall to accuse Pakistan of instigating the Sikh community. Perhaps it’s time Pakistan too lent active support to the Sikhs to acquire their own homeland, Khalistan, for there is considerable merit in the Sikh demand for their own sovereign state.

South Asia appears to be the next battleground where world powers will compete to seize the moment in a bid to lead the world; the New Great Game

Not a Real Estate Issue

Broadsheet: A Can of Worms