Former premier Mian Nawaz Sharif stuck to his old record at the Pakistan Democratic Movement (PDM)’s Karachi rally on August 29, blaming the military leadership for what he claimed was the country’s existing mess. But this time around, his tirade against the armed forces was largely ignored. Only a handful of traditional liberal and ethno-nationalist detractors of Pakistan and its institutions lauded Sharif’s speech, which gave no line of action or new direction to his party or the opposition alliance. Interestingly, even many of the Sharif loyalists in the Pakistan Muslim League-N (PML-N) did not echo the line of their political boss.

In contrast, his younger brother Shehbaz Sharif, president of the PML-N, who has long been vying for the coveted position of Prime Minister, played with his usual straight bat all through his three-day stay in the city. He focused his guns on Prime Minister Imran Khan and his team and resorted to some restrained fire on the Pakistan People’s Party (PPP), which is back to the position of a rival from being an ally and a friend.

The difference in the political approaches of the older Sharif and the younger one is usually interpreted as a mark of disunity in the ‘House of Ittefaq.’

But for Shehbaz, the goal of both the brothers remains the same – the holding of free and fair elections in the country. “Only, he (Nawaz) says it differently,” Shehbaz said in response to a question by a senior journalist during his recent sojourn in Karachi. 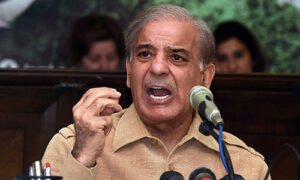 While the difference in approach is seen as an indicator of the growing chasm between the two brothers by many analysts, others believe that this strategy suits the PML-N.

The latter set of analysts have at least proved right in their assessment that Shehbaz has not ditched his brother despite all the pressures, and all the predictions and claims of a division in the party have proven to be incorrect – at least so far.

But this does not mean that all is well within the ranks of the PML-N. The difference of approach between the two brothers is taking its toll on the party as a clear sense of direction and strategy seems to be missing.

Sometimes the hawks — many of whom do not have an election constituency of their own – take over the narrative under the stewardship of Maryam Nawaz – the heir apparent of Nawaz Sharif’s politics. And at other times, it is the turn of Shehbaz Sharif, with all his politically correct statements and line of consensus and reconciliation.

Interestingly, background interviews reveal that Shehbaz Sharif’s pragmatic line has more takers within the PML-N camp of electable politicians, who hold the view that the senior Sharif’s politics of confrontation would keep them out of the corridors of power for at least another five years following the 2023 general elections. This scenario is unacceptable to Pakistan’s traditional, constituency-based politicians, who can thrive and keep their politics alive only if they are in the corridors of powers or at least nearabouts.

However, the hawks within the PML-N believe that their doves can only find an opening to power if the party keeps exerting pressure and attacking the military establishment and, above all, its leadership on points which hurt them.

But the PML-N’s offensive strategy carries more risks than opportunities. Therefore, the electable leaders of the PML-N refuse to take ownership of the continuing politics of confrontation. Nawaz Sharif, his daughter and their close confidants are aware that they are walking on thin ice.

So where does the much-weakened opposition alliance – the Pakistan Democratic Movement (PDM) – stand in this equation? After the breaking away of the PPP and the Awami National Party (ANP) from its ranks, the PDM has lost its symbolic aura of a united opposition. The PML-N’s lack of direction and contradictory signals also remain a handicap for the alliance, in which the only other significant party is the Jamiat-Ulema-e-Islam (JUI) faction of Maulana Fazl-ur Rehman. The JUI-F is the only party which can muster some street power on the back of the network of Deobandi seminaries across the country. However, even in the seminaries, the Maulana’s power and his leadership are being challenged by those clerics who do not agree with his confrontationist style of politics and his use of seminary students like fodder in any anti-government movement for the sake of his own personal ambitions.

No wonder, the PDM’s announcement of another march to Islamabad failed to grab any serious response, as critical players within the opposition know this well enough that Imran Khan’s government, which has completed the first three years of its term in August, remains all set to achieve the feat of reaching the five-year finishing line without any change in the leader of the house. And all the demands for early elections and dislodging of the government are no more than routine politicking by the opposition, struggling to find its feet and staying relevant in national politics.

The ruling Pakistan Tehreek-e-Insaaf has to tread carefully in the remaining two years of its five-year term if it wants to win the 2023 elections. Meanwhile, the opposition, especially the PML-N, also faces a Herculean task if it wants to stay in the game.

Whose narrative will prevail within the PML-N in the final run-up to the elections, is a pertinent question. For many aging politicians in the government and the opposition camps, the 2023 elections are likely to be their last one. The PML-N is all set to plunge into a power tussle among the generation next of the Sharifs as they are unlikely to maintain that delicate balance, as observed by Nawaz and Shehbaz Sharif.

One dark horse, which many rule out as forming a government at the centre in the near future, is the PPP which can spring a surprise if the PTI fails to improve its game in the remaining years in power and the PML-N is unable to rein in its internal confusion. Shehbaz Sharif appears to be a safe bet for the PML-N at least for now, but there is many a slip between the cup and the lip. Will the Sharif family’s new generation allow Shehbaz to play his cards peacefully in the last leg of his political career? Is Maryam Nawaz ready to take a backseat and allow her uncle to steal the limelight from her and get into the driving seat?

Shahbaz Sharif has seen this premiership slip out of his fingers a couple of times in the past. Will he be lucky this time around or will he bow out, sporting the badge of prime minister-in-waiting, as always.