The National Accountability Bureau (NAB) has never been an issue for the masses, who if given a chance would like to see all the bad guys of Pakistan’s tiny ruling elite taken to task for their loot and plunder of the national wealth. Yet, the NAB has remained in the top news year after year since it was first established with a lot of fanfare during the heydays of former military ruler General (retd) Pervez Musharraf with an aim to eradicate corruption at least in the highest echelons of power. In this context, NAB remained only an issue for the miniature but very influential and powerful segment of the country’s ruling elite. No wonder using the media blitz, it did manage to make the NAB controversial and make a case to defang it, if not to wrap it altogether.

It is also a fact that as the country’s top anti-corruption watchdog, the performance and efficiency of the NAB has always been questionable because none of the much-maligned politicians had ever been convicted.

The reason; the poor investigations, prosecution and political interference did not allow the NAB to ensure the closure of the cases. However, it did manage to at least initiate inquiries, investigations and cases against the corrupt members of the ruling elite and keep some of them under custody for at least a few months. No wonder all the traditional political forces, their loyal bureaucrats and even many businesspeople hated the NAB and wanted to pull down the curtain on it.

And finally, the alliance led by the Sharif and Zardari families in less than two months after coming to power rushed to defang the NAB in one of the most controversial law-making exercises witnessed in the country.

The amendments made to the NAB (2nd Amendment) Bill 2021 by the Shehbaz Sharif-led government will benefit more than 90 per cent of cases, including high-profile ones against politicians – whether at the inquiry, investigation or trial stage. One of the biggest beneficiaries of these amendments are the members of the Sharif clan and their close aides.

In May, the NAB amendment bill was rushed through both the National Assembly and the Senate without even any kind of serious debate. The National Assembly passed the bill with more than 120 vacant seats. The small and friendly opposition, whose leader wants to run in the next election on the PML-N ticket – facilitated the process with their connivance.

President Dr Arif Alvi did the right thing by refusing to sign the bill as he returned the NAB bill and the one pertaining to electoral reforms, saying they violated Article 46 of the Constitution.

The NAB law will have retrospective effect — from the date of promulgation of the original National Accountability Ordinance (NAO) 1999. Legal experts say that more than 90 per cent of NAB cases, whether at inquiry, investigation or trial stage, will benefit from these amendments.

Now the NAB, according to a senior NAB official, stands powerless. “It would have been better to shut the NAB and save valuable money from the national exchequer than to run it without any power,” the official told Narratives requesting anonymity. He said that now the accountability of the corrupt elite is impossible.

The biggest change made in the NAB law is that now “the burden of proof” has been shifted to the one who reports the matter. This would allow any suspect to get away with the illegal wealth as convicting a white-collar criminal was a Herculean task even under those NAB laws which were dubbed as draconian. 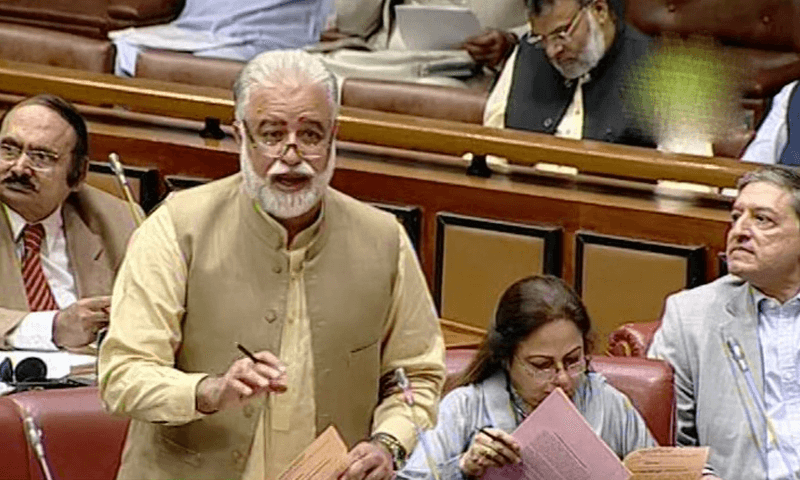 The sole and sole purpose of this new legislation is to benefit the few, who are accused of corruption. The absence of the PTI members – who have tendered their resignations from the National Assembly — made it easy for the government to bulldoze these controversial amendments, which are being challenged in the Supreme Court.

The amended NAB law says that in assets beyond means cases, the value of property will be considered as shown in a registered document or the Federal Board of Revenue value, whichever is higher.

This benefits the accused as the FBR rates were introduced about five years back. It means that the value shown in the registry or deputy commissioner rate will be taken as the value of the immovable asset for all such properties, which were acquired five years ago.

If a public office holder possesses assets worth millions/billions of rupees, which cannot be justified with known sources of income, the NAB cannot proceed against the accused under the new law as the entire onus will be on the bureau to establish that these assets are made from corrupt and dishonest means. Section 14 of the NAO 1999 — which says the burden of proof in cases where the anti-graft body has made a reasonable case will shift to the accused person – has been deleted.

In the misuse of authority cases, it will be mandatory to show that a public office holder making a decision gained ‘monetary’ benefit from that decision.

In the absence of a NAB chairman or deputy chairman, any senior officer of the NAB will function as the chairman, which can always be used by the sitting government.

The definition of ‘asset’ has also been changed. Earlier, it meant any property held by the suspects, directly or indirectly, in his/her own name or in the name of a spouse or relative. Now, a property only in the name of the accused or the benamidar will be included in the definition of an asset. This will benefit a number of high-profile suspects, including Prime Minister Shehbaz Sharif — accused of accumulating assets in the names of their spouses and relatives.

In Section 23 of the NAO 1999, which says a suspect cannot dispose of his property during inquiry and investigation without permission of a court, has been deleted. Inquiry or investigation time has been restricted to six months by law, which is not practical in white-collar crime cases. Similarly, the remand time in NAB custody is reduced to 14 days from 90 days.

In Section 21, clause (g) has been scrapped. This section made evidence received from a foreign state admissible in court proceedings notwithstanding with provisions of Qanun-e-Shahadat Order 1984.

The biggest beneficiary of this deletion is Maryam Nawaz – the PML-N’s vice president — whose trust deed written in Calibri font was received from the UK. These documents will no longer be admissible in court proceedings.

Another amendment pertaining to cheating the public at large now states that the number of affected people should not be less than 100. This benefits senior PML-N leaders Khwaja Saad Rafique and his brother Khawaja Salman Rafique, who face the Paragon society reference involving 76 affectees. Earlier, the NAB as per its standard operating procedures could take cognizance of up to 50 affectees. Later, a Supreme Court judgement said that 22 people can also be treated as public at large.

The amended Section 26 says that an accused becoming an approver “shall be disqualified from holding any public office for five years.” This discourages the accused from coming forward. Another new condition says that an approver’s disclosure shall be ‘based on material’. This is a new hindrance, as in white-collar crimes, a person privy to the planning of an offence may not be able to have ‘material’ to support disclosures.

A change has also been made in Section 36 of the 1999 law. This provision provides indemnity to the state functionaries and NAB officers for actions done in good faith in pursuance of the provisions of the NAO.

With an amendment to the application clause (Section 4), the decisions of federal, provincial cabinets, ECNEC or any regulatory body have been excluded from the NAB’s domain. In the appointment of a NAB chairman, the president’s role has been eliminated. Now, the federal government will appoint the chairman whose tenure has been reduced to three years from four.

In a nutshell, these hasty NAB amendments – the foulest in the country’s history – have been made to give a clean chit to top politicians, who already stand accused of corruption and give them a license to do more plunder in the future. The people or the national interest do not figure in any of these NAB amendments.