The US establishment and the political leadership were only interested in “a face-saving exit” and some semblance of continuity — at least for a short term — after their departure from Afghanistan. This was the assessment of some top Pakistani security officials long before the last American serviceman, Major General Chris Donahue, commander of the US Army 82nd Airborne Division, boarded a C-17 cargo plane at the Kabul airport on August 30 — a day before the scheduled departure — marking the end of Afghanistan’s occupation. But ironically, after spending $2.3 trillion dollars in the war effort – which amounts to almost $300 million a day over two decades – and losing more than 2,400 service personnel in one of the most backward, broken and impoverished country, Washington failed to even meet this humble goal.

The pro-West Kabul regime and its well-equipped armed forces collapsed like a house of cards as the Afghan Taliban took back one district after another, mostly without a fight, and marched into the capital, Kabul, triumphantly and with ease.

Such a swift and complete collapse of the US-led Afghanistan mission was not anticipated even by many of its friends and rivals in the region. The local collaborators of the US-led NATO forces in Afghanistan were hoping against hope, till the last moment, that they would not be abandoned so suddenly by their mentors. In Pakistan, the lobby of friends and supporters of the pro-West Kabul regime also did not want the US-led forces to leave. Even the Pakistani establishment remained opposed to the haste with which the Americans pulled out of the war-torn country. 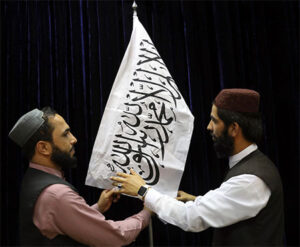 “Pakistan urged the United States to negotiate with the Taliban from a position of strength, but it was not done,” a senior Pakistani security official said in a background briefing.  “The US announced the withdrawal of its forces from Afghanistan before any negotiated settlement, which weakened its hand. A Taliban victory after that was just a matter of time. And that’s exactly what happened,” he said.

However, the US’ hurried departure — described by the American media, as well as President Joe Biden’s opponents as “ignominious,” — was celebrated in mainstream Pakistan. Not just the proverbial man on the street had words of praise for the Afghan Taliban’s determination, steadfastness, courage and sacrifices, but even Prime Minister Imran Khan paid them a tribute by saying that they had broken the “shackles of slavery.”

The official Pakistani position, however, remained one of extreme caution, both in the run-up to the Taliban takeover of Kabul and even after the complete withdrawal of the US-led forces. “Some feel that we are helping the Taliban,” shared a senior official. “But that is an old story. Now Pakistan has no favourites…, we want peace and an inclusive government in Afghanistan.”

But the official line remains unpopular. There are many former senior civil and military stalwarts, who want Pakistan to take the lead in recognising the newly formed Afghan Taliban government and do whatever it can, despite its meagre resources, to help Afghanistan. (See Lt. Gen. Naeem Khalid Lodhi’s article on page 32). And by doing this, they are articulating the popular sentiment on the Pakistani streets. 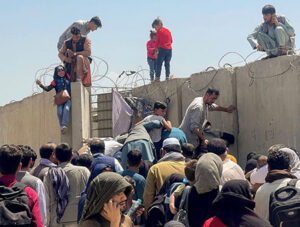 A clear pro-Afghan Taliban position does not suit Pakistan’s interests at this stage, according to Pakistan’s current military and civil administration, which wants to act in tandem with the international community. But given the rapid developments on its western frontiers, Islamabad will be forced to take a clear position, sooner rather than later.

A senior cabinet member remarked that the interests of Russia, China, Pakistan and Iran converge as they all want peace and stability in Afghanistan. “But there are forces which want to keep the pot on the boil in Afghanistan,” he said.

The Pakistani leadership also remains wary of all the mudslinging by the West that Islamabad helped the Afghan Taliban all through the so-called US-led “war on terrorism,” providing them safe havens, as well as material support.

According to a cabinet member, Pakistan’s efforts for peace were seen by the West as collusion with the Taliban. “But it was the US, which recognised and negotiated with the Taliban… We were not even in the room when Washington held talks with the Taliban for two years (in Doha),” he said.

Almost a similar opinion was shared by a senior security official, who said that it was the United States which “legitimised” the Taliban. “After the failed campaign, they (Americans) are looking for a scapegoat… and making Pakistan a scapegoat suits their designs.”

While Pakistani leaders try to ward off the propaganda and smear campaign against the country, they are also grappling with the fact that the Taliban victory on their Western frontiers could inspire violent and extremist religious groups to swing into action on Pakistan soil, which was cleared of militant safe-havens after huge efforts and sacrifices.

Afghanistan poses a two-fold challenge for Pakistan. First, Pakistan has to be seen as acting with the international community, so as not to antagonise the US and other Western countries. Second, it has to manage the Taliban reality in Afghanistan and keep the fallout of any unrest and possible renewed civil war there from spilling over into its northwestern territory.

A cabinet member remarked that the one country that proved right on Afghanistan was Pakistan. “We had been advising the United States to talk to the Taliban since the days of President Pervez Musharraf,” he said. “But Pakistan’s advice was ignored…”

The Americans did finally open talks with the Taliban in Doha, but by that time their will to fight and get a better deal in the negotiations was all gone. The Americans appeared to be only interested in a safe-exit and some face-saving. They did get a safe-exit as the Taliban stopped attacks on the US-led forces, but in doing this, the American establishment lost both face and credibility as it was seen, once again, as abandoning the region, despite all the pledges made by its former presidents and its ally, the United Kingdom.

Pakistani officials said that Islamabad would have wanted to see a better ending to the American adventurism in Afghanistan. “But unfortunately, the former Afghan president, Ashraf Ghani, was in some kind of euphoria… had he listened to us, the situation probably would have been different,” the cabinet member said.

The US has, once again, abandoned the region and created a security vacuum. It is again being seen as a betrayal of its allies. For many Afghans, the entire western bloc has transformed from “the leading patron” to “an untrustworthy, selfish foreigner.”

Pakistan also has been left high and dry to fend off the Afghan problem on its own, as was done in the 1990s, when from the position of the most allied ally it became the most sanctioned ally following the withdrawal of the former Soviet Union’s troops from Afghanistan and the collapse of the Soviet-backed communist regime.

Islamabad played a central role, both in the US-led effort against the invasion of Soviet Union troops in Afghanistan, and then again in the US-led “war against terrorism” during President Musharraf’s days.

“Yet, we are being accused of running with the hare and hunting with the hound,” said a senior security official bitterly. “Pakistan killed 1,100 top Al-Qaeda militants and arrested 600 others… we couldn’t arrest only two people: Osama bin Laden and Ayman al-Zawahiri, though his family was arrested…  Pakistan paid a heavy price as the militants in Afghanistan slipped into our territory when the Americans took action against them without informing us,” he said.

Islamabad maintains that it paid a heavy price for joining the US-led war against terrorism. “There were 80,000 casualties and the economic cost of this war was a staggering $152 billion… from 2007 to 2015, Pakistan faced terrorism almost every single day,” one cabinet member remarked angrily.

A security official stated that the war against terrorism forced the Pakistan Armed Forces, especially the military, to change its orientation.

“Before the Americans came to Afghanistan, we were only focused on our eastern border. But the spillover of militants into Pakistan, forced the army to change its training manual.”

The Pakistan army – trained in conventional warfare – suffered high casualties at the start of their campaign against the militants. It had to go into those remote tribal mountainous regions, which were earlier left unguarded, for the first time ever.

Pakistan became the only country in the world to turn the tide of terrorism and establish some semblance of a state in those regions which were once seen as ungovernable.  And it required a Herculean effort.

“There may still be sleeper cells, sympathisers of militants and sporadic incidents of terrorism, but the organised network of terrorists has been smashed,” the security official said.

What the Americans wanted initially and in all those years was that Pakistan also take on the Afghan Taliban — a demand rightly ignored by Islamabad, as it doubted US intentions and was also wary because of the fact that the US-led coalition had given anti-Pakistan forces, including India, a free-hand to use Afghanistan’s territory against Pakistan.

Pakistan’s auto-defence mechanism against India came into action as New Delhi tried to exert pressure, using the Afghan intelligence agency and other anti-Pakistan elements within Afghanistan.

In retrospect, Pakistan’s strategy of not fighting the Afghan Taliban proved right as its troops were already spread too thin and constantly at war for more than a decade – moving from one place to another. 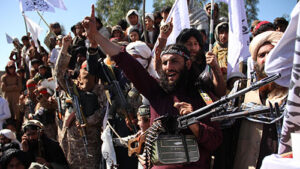 “Our troops are tired…they have been moving from one place to another. If there is peace in Afghanistan, our back will be safe and Pakistan will have an opening to Central Asia,” said the security official, underlining the fact that Islamabad has a stake in Afghanistan’s peace and stability.

But peace is one thing that appears to elude Afghanistan — even now. The Western experiment with Afghanistan failed, just as the one carried out by the former Soviet Union; neither could impose a change in the traditional Afghan society.

With the Americans and its other Western partners gone, Afghanistan’s peace project is now in the hands of the Afghans themselves and its immediate neighbours, including Pakistan, China, Russia and Iran. There are spoilers, including India.

Under these circumstances, the Afghan Taliban themselves appear to be the best bet to bring some stability peace in Afghanistan. Their traditional and Islamist ways — seen as being harsh by the West — are acceptable to the majority of Afghans who still live under a deeply ingrained tribal system.

But for peace to succeed in Afghanistan, the immediate neighbours, in particular, and the world community, in general, will have to support the new rulers of Kabul. And this they must do unconditionally and allow Afghans to live, frame laws and run their country just as they want. This means doing away with the enforcement of Western democracy, Western values and Western concepts of human rights in this impoverished country. These Western projects have brought only wars, destruction, deaths and suffering to the Muslims countries – from Iraq to Libya and Syria to Afghanistan. Western democracy and its accompanying paraphernalia are not suited to the Muslim world. If the West is really interested in seeing peace in Afghanistan, then it must accept the fact that the world is diverse and that the western way is not the only way of life.