The Kashmir conflict is a legacy of the post-colonial partition of the Indian subcontinent in 1947 and the birth of two independent countries: India and Pakistan. Since then, contrary to a United Nations resolution, Indian armed forces have been occupying the disputed region of Jammu-Kashmir for more than seven decades, killing thousands of people in the held valley, committing a myriad human rights abuses, and turning the vale into the largest prison in the world.

When the Indian subcontinent gained independence from British colonial rule, the state of Jammu and Kashmir was among the largest and most populous of the subcontinent’s roughly 562 princely states. At the time of independence, the area was under the rule of a Hindu king. However, Muslims comprised about 80 percent of the population, with the understanding that the state would naturally join with Pakistan. But violating the wishes of the Muslim population, the ruler of Kashmir, Maharaja Hari Singh, signed the instrument of accession with India in October, 1947, making the region part of the dominion of India.

Subsequently, there was a popular uprising against the Maharaja’s decision in the entire Kashmir state, with the population feeling badly betrayed. And soon thereafter, this was followed by a freedom movement, resulting in about 30 percent of the territory securing its freedom from India and seceding to Pakistan. Since then, Pakistan and India have fought four wars over Kashmir, and the region has witnessed countless standing armed conflicts and skirmishes. The UNO has passed various resolutions, granting the people of Kashmir the right to self-determination, and India and Pakistan have also signed agreements to resolve the dispute through mutual dialogue. But New Delhi has always used delaying tactics, ignoring all international and mutual agreements. To compound this situation, on August 5, 2019 the incumbent Modi government unilaterally decided to abrogate the special status of Occupied Jammu and Kashmir, inviting outrage from the UNO, Pakistan and human rights organisations and independent voices across the world and also within India.

It is important to point out that Article 35A of the Indian Constitution, which the Modi government scrapped on August 5, 2019, had empowered the Jammu and Kashmir state legislature to define “permanent residents” of the state and provide special rights and privileges to them. But the Modi government scrapped this article, violating all international and mutual accords between Islamabad and New Delhi. Since then, the situation has turned ugly. Following the scrapping of the special status of Kashmir, the Hindutva goon-led BJP government put all the Kashmiri leaders and thousands of youths behind bars, banned the entry of the international press into the valley, and barred all broadband and internet services in the region, turning the entire valley into a virtual prison cell. To add to this, in an attempt to systematically shift the demographic equilibrium against native Kashmiri Muslims, the Modi government is now pursuing the Israeli policy of granting hardline Israeli settlers land in Palestine — in the process occupying large swathes of their area — by issuing residence certificates to Hindu extremists of different states to settle in Muslim areas. According to a report, the BJP has so far granted residency rights to between 40,000 and 50,000 people in the shape of domicile certificates.

In the prevailing scenario, the question arises: what line of action should Pakistan adopt for the resolution of the issue? But first, let us try to understand why Kashmiris and the Kashmir cause have vital importance for Pakistan.

Firstly, we need to know that the liberation of Kashmir from the Indian yoke is purely a matter of basic human rights. According to the UN charter of human rights, people of any region in the world are fully authorised to choose their future as an independent nation by using their peaceful democratic right. The UN granted this right to the Kashmiris through various resolutions, and the late Indian Prime Minister Jawaharlal Nehru made repeated pledges that the people of the held area would be allowed to exercise their right to self-determination. However, the plebiscite committed to by the Indian premier under UN observers never came to pass. Kashmiris have, for decades, been writing the history of their freedom struggle with their blood. In the past seven decades, over 100,000 Kashmiri people have been killed by Indian forces. According to official reports, out of these, more than 7,200 people have been murdered in custody, over 23,000 women have been widowed, around 110,000 children have been orphaned and more than 11,000 women have been raped by Indian military forces. In addition to this, over 7,000 unnamed mass graves have been discovered with thousands of victims. Some 10,000 Kashmiri youth have been injured due to the deliberate use of pellet rounds, the latest weapon of the occupied forces. According to independent reports, with the deployment of around 200,000 additional troops after the August 5, 2019 scrapping of articles of the Indian Constitution relating to Jammu and Kashmir’s special status, the number of Indian occupation forces in the state touched more than 0.7 million and the region has become the most militarised zone and largest prison in the world. How can the international community, the UNO and rights groups justify these human rights and UN resolution violations? Sadly, the majority of them remain silent.

Human rights abuses in Occupied Kashmir have been committed by successive Indian governments for decades. However, the world has seen a sharp increase in crimes against humanity since the Modi-led BJP took power in India. The Hindu nationalist party seems hell-bent on destroying all vestiges of autonomy and crushing the people’s desire for freedom with brute force.

However, when it comes to the matter of geography, it is clear the region is naturally attached only to Pakistan. To begin with, several major mountain ranges of the Himalayas connect Kashmir to Pakistan. Kashmir borders the Pakistani provinces of Khyber Pakhtunkhwa and Punjab in the west, the region linked to the Wakhan Corridor of Afghanistan to the north, and China (Autonomous) in the east. A narrow link with the Indian state of Himachal Pradesh to the south is the only connection of the occupied region with New Delhi.

But it is not the region’s ideological and geographical attachment to the country that makes Kashmir a matter of Pakistan’s survival.

Successive Indian governments have made repeated announcements they will turn Pakistan barren by controlling the flow of waters of Pakistani rivers running through Occupied Kashmir. The Indus River originates in the Tibetan plateau, making its 3,200 km journey southwards along the entire length of Pakistan, before emptying into the Arabian Sea. Pakistan has about 60 percent of the catchment area and river basin of the Indus. The Indus has five main tributaries. The Jhelum and the Chenab, the main two tributaries, flow through IOK (Occupied Kashmir) before entering Pakistan. Unfortunately, in 1962, with the signing of the Indus Water Treaty, Pakistan surrendered India the remaining three tributaries (Ravi, Sutlej and Beas) to India. And so, most of Pakistan’s arable land is dependent on the Jhelum and the Chenab. If Pakistan withdraws from its stand on Kashmir, India would permanently become the upper riparian and Pakistan the lower riparian of the Indus River and all of its tributaries. This would be tantamount to allowing a hostile India to fully control the Pakistani waters, leaving millions of its farmers in a terrible bind and damaging its entire agricultural economy which contributes to more than 60 percent of its GDP. Giving India control of its waters would compromise Pakistan’s sovereignty and cause it irreparable harm.

The Jamaat-e-Islami believes in a peaceful solution to the Kashmir dispute. As head of Pakistan’s most organised democratic political party, I ask the international community not to ignore the demand of millions of Kashmiri people for freedom from India. The flag of freedom is now in the hands of the well-educated and socially aware youth of Kashmir. The youth of Pakistan is equally attached to the cause.

Kashmir is surrounded by four atomic powers (Pakistan, China, India and Russia) and any conflict there could pose a serious threat to not only South Asia, but to the entire world. Any future direct clash between regular Indian and Pakistani forces could escalate to an exchange of nuclear weapons. The horrors of this war can be well imagined. So, the international community must realise its duty to find a peaceful solution to the issue.

The Kashmir dispute is a big question mark on the credibility of the UN. On April 21, 1948, UN Security Council Resolution 47 was adopted concerning the Kashmir conflict. Today, there are 11 Security Council resolutions for a free and impartial plebiscite in Jammu and Kashmir, but New Delhi doesn’t just block them, it also uses violent methods to continue its illegal occupation. This reveals the failure of international organisations, namely the UN and its champion (the West).

Quaid-e-Azam Muhammad Ali Jinnah had declared Kashmir the jugular vein of Pakistan. Its liberation from the Indian yoke will finally give the unfinished business of partition much-needed closure. This is what the Jamaat-e-Islami Pakistan firmly believes. 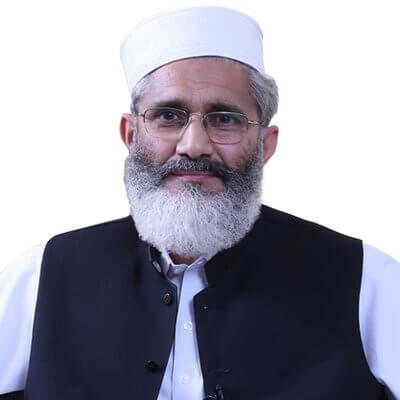 Siraj ul Haqhttp://narratives.com.pk
The writer is a Senator and the Ameer of the Jamaat-e-Islami, Pakistan.