Champion of the Dispossessed

Architect and urban planner, teacher and activist, Arif Hasan has seen Karachi evolve from a well laid-out urban centre to the sprawling, unwieldy megapolis it is today. His work with the Orangi Pilot Project and Urban Resource Centre, just to name a few projects, placed him in a unique position to acquire a deep knowledge and understanding of urban settlements and their related problems.

Arif Hasan occupies the home he moved into in the seventies. And while the city has morphed around it, this low-lying residence, sheltered by venerable old trees, suggests a stillness and steadiness. There is probably less activity in the adjoining office but it still hums with the collective consciousness and ideals of years of work and research.

I was ushered into his small office, filled with books and papers and Arif Hasan greeted me in his low-timbered voice. “Nowadays, I am collecting the kachra (scraps) of my life’s work,” laughed the recipient of several prestigious awards, including the Hilal-e-Imtiaz.

Arif Hasan no longer occupies any official post but devotes himself to reading and writing. In fact, several books are in the offing.

His parents migrated to Karachi from Delhi when he was about four years old. “We caught the last train which ran from Delhi to Karachi after Partition,” recalls Arif. “I remember arriving at Cantt Station and then going to a refugee camp. But we only stayed there for some hours and my father came and told us that a house had been arranged.” The family moved into what used to be an Intelligence school and this is the home where Arif Hasan and his sister grew up.

His father was the secretary of the Pakistan Institute of International Affairs, and political ideology, social issues were often the topic of debate and discussion at home. Perhaps that’s where the young boy absorbed the spirit of inquiry and a strong sense of justice.

Arif Hasan later went to England to study architecture and subsequently worked in Europe for a few years. “I was very lucky to have gotten the opportunities I did. But I never thought of staying on.”

He returned to Karachi and started designing private residences. “Again I was very fortunate; I designed one home and then others just followed. If you name some affluent person of that time, it’s likely I designed his home,” he says with his characteristic wry smile. He also designed the landmark Hasan Square building. “But we didn’t see eye to eye and I stopped working with developers as a matter of policy after that.”

Arif’s reputation, however, is built on his ground-breaking work in the development sector. How did that shift come about? He explains that near the home where his family had been settled, many refugees were also settled in katchi abadis. Growing up Arif developed close friendships with them.

“When I returned from England I went to meet them and learnt that they were being re-located,” recalls Arif. “So they asked me to help them organise the new settlement. But suddenly, they were served eviction notices in violation of the earlier promise.”

“I was working on designing the home of a very senior police official at the time and I spoke to him about the issue. He told me, ‘You are too young to understand. These people are thieves. Their woman have bad characters. It’s better if they are moved far away.’ I couldn’t work for him anymore. I didn’t complete his home.”

This was in 1973, and what followed left a deep impact on the young architect. “It was the first time I saw a settlement being demolished. Women screaming and cursing, small children cowering in fear, the older children scrambling to save what they could.  I was devastated,” says Arif. “Not anymore,” he says self-deprecatingly. “I can calmly go and watch an abadi being razed now.” But a newspaper photo in a corner is lingering proof of how this event shaped his life. “The protesting girl in the newspaper photo looks just like a young girl in that demolition all those years ago,” Arif tells me.

This incident made the young architect start to look into land issues. “I continued to design houses. But I also started travelling across Pakistan. I went to far-flung places where there were no roads. I also made many trips by boat in Sindh and Punjab and I got to know the Mohana community.”

Back in Karachi, one day he got a telegram from his Mohana friends asking for help. “Under the new Sukkur Master Plan, the Mohanas were being asked to move from the area where they had been settled for centuries. Even the British had allowed them to stay here.” Arif Hasan prepared a proposal and presented it to Ali Hasan Mangi, who was an MNA at the time. “He called me and after speaking to me, he said, ‘Leave the plan with me. It’s done.’ And they were not shifted.” Unfortunately, the Mohanas were eventually moved under the PPP government about four years ago.

Working with these disadvantaged communities made Arif Hasan realise how complicated land issues were. “It made me aware that there is a whole other world out there.”

Arif began researching and writing on these matters and his writing came to the attention of Ghulam Kibria. “He offered me the job of consultant to the government’s Appropriate Technology Development Organisation, of which Kibria sahib was the chairman or ‘chorman’ as he jokingly called himself.”

This experience proved invaluable for Arif Hasan, who got the opportunity to work and experiment with low-cost technology, hydroelectricity, land systems and much more.

“The education I got here prepared me for the Orangi Pilot Project, where I questioned the traditional engineering standards,” recalls Arif.  But for this he was roundly criticised by the engineering establishment at home and abroad. “Akhtar Hameed Khan was told ‘who is this quack? He will sink all your money.’ But Akhtar Hameed Khan had faith in Arif Hasan’s unusual ideas and told him to carry on. “We will either swim together or sink,” he said.

Fortunately, Arif Hasan was vindicated and even his harshest critics acknowledged his success. “John Pickford, who was the guru of sanitation at the time, actually sent his students here to study our systems.”

The OPP’s successful sanitation programme and its low-cost housing schemes were both lauded widely and even replicated. But why didn’t the government adopt the model on a wider scale to solve the problems of its home city?

“They were adopted as policies,” says Arif. “But there are very deeply entrenched interests in continuing things as they are.”

“Another reason is that international donor agencies don’t like this model,” he explains further. “Their mode of operation is to inflate costs and never take into consideration existing infrastructure. This raises loans manifold.”

Arif Hasan also became closely involved in the uplift of the Thari people while working with Ghulam Kibria. “After the drought in 1987, I wrote an article arguing that the disaster was the result of social change and not lack of rainfall, which was a recurring feature.” UNICEF invited him to present his findings and consult on the project which led to the formation of the Thar Rural Development Project, managed by locals of the area.

Another defining moment for Arif Hasan came in 1983 when the then commissioner of Karachi approached him and Ghulam Kibria to do a socio-economic survey of the Lines Area in preparation for a re-modelling proposal. “We were promised a handsome fee and the results were to be presented to some big international agency.” But Arif Hasan once again encountered desperate people who were being evicted from their homes. “We could not be party to it and we left the project.”

At the time, Arif Hasan was teaching at Dawood College and along with a colleague, Professor Javed Haider, started sending students out into the field to talk to people and investigate facts on the ground. “We would assign students to problem areas and we learnt a lot.” This in turn became the basis for the Urban Resource Centre.

With all this first-hand data, the URC became a valuable source of information and advice to government bodies. “Gradually, governments began to listen and we altered a number of projects for the better, like the Mass Transit plan, the Northern Bypass and others. But the government was more receptive in those days, even under martial law. And the first Benazir Bhutto regime was very receptive.”

As a champion of the dispossessed, Arif Hasan has been a vocal critic of the recent anti-encroachment drive in Karachi that aims to gentrify the Saddar area. “I am totally opposed to it,” he says. “We gave an alternate proposal, presented a study on street economy but times have changed. People are afraid to take a stand for themselves now.”

Threats by disgruntled elements are nothing new for Arif Hasan, who has earned the ire of many during the course of his career. “Of course, I have received threatening calls, had my offices raided by the intelligence. The police and intelligence have helped me as well. But it’s different now,” he says.

In the absence of state support, it is inevitable that illegal settlements and the informal sector will flourish. “The dalal who sets up katchi abadis has settled more families than KDA or KMC has,” asserts Arif. But do these residents have any security? “They have security but it is not exercised by the courts. There are laws and precedents to protect these abadis but they are not honoured.”

“There is a very strong anti-poor bias among our middle classes, intellectuals and it is now seen in the judiciary. As in the case of the drive in Saddar, the law was implemented but justice was not given.”

The recent rains in Karachi laid bare the weakness of the city as urban flooding destroyed homes and livelihoods. The most affluent areas of the city were among the most hard-hit, focusing attention on a long-brewing crisis. The federal government has also announced a generously funded relief initiative for Karachi.

“They should first focus on what can be done easily. That is to remove blockages for water to enter the sea at points like Gizri Creek, Mai Kolachi etc.” explains Arif. “Then we need to stop reclaiming land. But none of this is being done. All the focus is on cleaning the drains. Even for that, one just has to identify the choking points. We don’t have to bother with the rest for now. This is not a permanent solution but will help enormously in the next rainy season.”

He also stresses the need to prepare for a post Covid world. “The ongoing pandemic has made it clear that we cannot manage relief or development without a system of government at the union council level,” asserts Arif Hasan. The good news is that the structure is already in place. Backed by data from NADRA, the Union Council has inroads to the entire community. Growing internet usage will make this task easier.

Arif’s predictions for the future of Karachi remain rather grim. “The most serious growing issue of Karachi is the widening gap between the rich and poor; economic, spatial and social.”

This can be seen clearly with regard to land access. Today affordable land is available only on the outskirts of the city so the poor are being further marginalised.

“Land use in Karachi is determined almost entirely by land value and potential land value. This is not how a city is governed,” says Arif. “There is a serious need for urban land reform. And we need to stop using land for speculative purposes.” 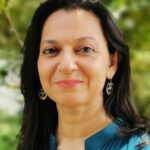 Zahra Chughtai has served as Online Editor, Newsline and also as Assistant Editor, Herald. Presently, she freelances and runs her own interiors and lifestyle online publication
View Posts
Pakistani Icon