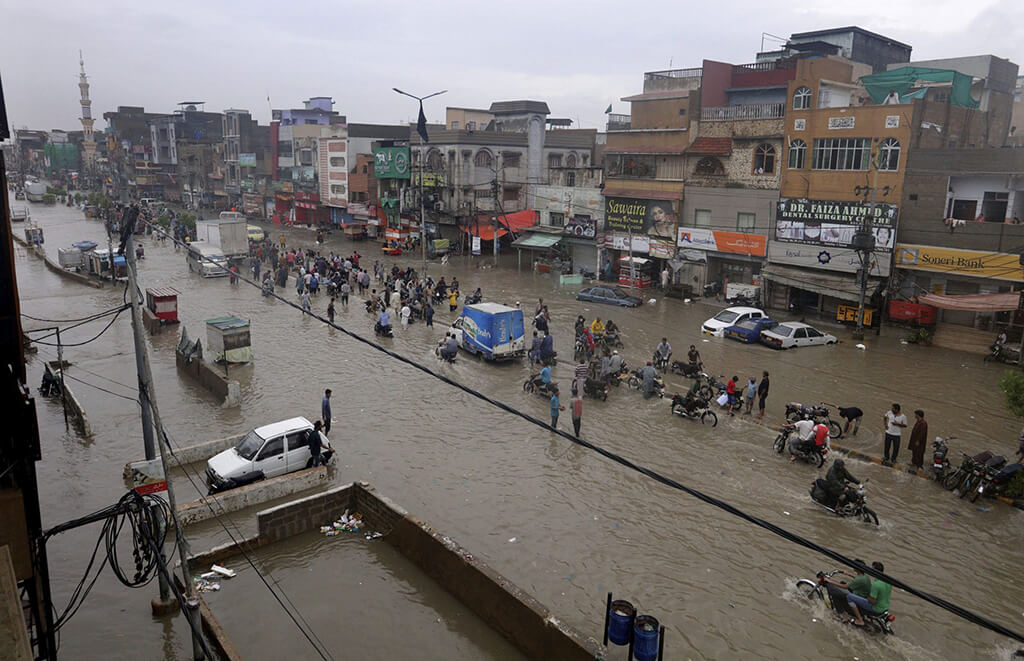 Who Will Run Karachi?

Karachi continues to simmer, but in the federal and provincial corridors of power it is business as usual. Following record rains in Karachi during August — when a freak monsoon spell resulted in more than 484 mm (19 inches) of rain over the month, including the highest-ever-recorded rainfall of 230 mm (09 inches) in just 12 hours on August 24 — the plight of the city became not just the top national story, but also moved the high and mighty in Islamabad and Rawalpindi to action.

From Prime Minister Imran Khan to the Chief of Army Staff (COAS), General Qamar Javed Bajwa, and from the provincial leadership to a number of high-flying federal ministers, all of them focused their energies on Karachi. Tall promises were made and passionate assurances were given, raising hopes that this time around Karachi would finally get its share of administrative and financial powers.

In his much-hyped and long-awaited visit to the rain-battered megapolis, the Prime Minister — flanked by Chief Minister Sindh Murad Ali Shah and Governor Imran Ismail — announced a Rs.1.1 trillion Karachi Package and assured Karachiites that the provincial and federal governments would work together for the city’s betterment. Those were good optics. There was the initial burst of excitement followed by bickering between the top-guns of the Pakistan Peoples’ Party (PPP) and the Pakistan Tehreek-e-Insaaf (PTI) about the size of  the contribution made by each side to the package. And soon it dawned on the citizens of Karachi that while money had been promised for a number of old and ongoing projects, the structural administrative and financial issues of their city had not been addressed; in fact, they were nowhere on the agenda. But all the key political stakeholders of the city — the PTI, the PPP and the Muttahida Qaumi Movement (MQM) — celebrated the announcement of the package and took credit for it.

The crux of the matter is that the announcement of any number of financial packages will always prove to be too little and too late to resolve the gargantuan and complex problems of this mega city. Moreover, the critical question is, how will Karachi be run? Will it be run by the all-powerful provincial government, which has compounded the problems of this city over the last 12 years or so by usurping many functions and powers of the local government? Or like other big cities of the world, will it be run by an administratively and financially empowered and autonomous local government, with the mayor as its central figure.

Unfortunately, the latest Karachi package failed to address this main contradiction as the leadership focused on doling out money as an immediate, short-term relief measure rather than addressing the structural problems of governance and distribution of power and resources. Consequently, the crisis continues to brew, which is a bad omen for a city where the already existing ethnic, sectarian and class fault-lines, coupled with a multitude of grave civic problems, can explode into violence and mayhem any time.

Meanwhile the political leadership is found wanting as usual. The PPP is trying to maintain the status quo and further consolidate its grip on the city by creating new districts in utter disregard of the aspirations of the people. Meanwhile, the MQM has, once again, raised its contentious demand for an urban Sindh province, − which would only stoke ethnic tensions and lead to polarisation. The PTI, which secured the biggest mandate from Karachi in the 2018 elections, appears clueless as to how to live up to the expectations of Karachiites as practically, the federal government can do little directly for the betterment of the city, by sidelining the PPP government in Sindh.

The failure of the political elite to reach an understanding among themselves on how to run the city and their continued game of brinkmanship has made them part of the problem rather than the solution.

The question of how to settle Karachi’s problems and make it stand on its own feet should not be a complex riddle in this day and age. The administrative structure of other mega cities shows us the way.  A straightforward, easy solution is to empower the third tier of the government and allow it to play its role. Ideally, an economically and financially vibrant city like Karachi should not be looking to the provincial or federal governments for funds. The city government, if allowed, can generate its own resources. Unfortunately, the rural-based political elite is not ready to empower the people and, in the name of democracy, is resorting to majoritarian politics rather than ensuring inclusivity.

Therefore, it is imperative that the state institutions intervene and serve as a catalyst to get the issue resolved. The Supreme Court can do this by deciding the 2017 case filed by former Karachi mayor, Waseem Akhtar, calling for the implementation of Article 140-A of the Constitution in letter and spirit.  Article 140-A reads: “Each province shall, by law, establish a local government system and devolve political, administrative and financial responsibility and authority to the elected representatives of the local governments.”

The army chief, who has shown keen interest in the affairs of Karachi during his meetings with civil society members and businesspeople, can also use his influence to bring the warring political stakeholders of the city to the table and prod them to take a consensus decision, which redefines the rules of the game and empowers the city government.      In this day and age, Karachi should also be treated as a national security issue. A peaceful, efficiently managed and empowered Karachi will unleash its full economic potential, which will benefit not just the city and Sindh province, but the entire country. And this cannot be done without addressing the structural administrative and financial issues of the city and treating it as one holistic entity rather than dividing and bifurcating it for narrow election goals − as is being done by the PPP.