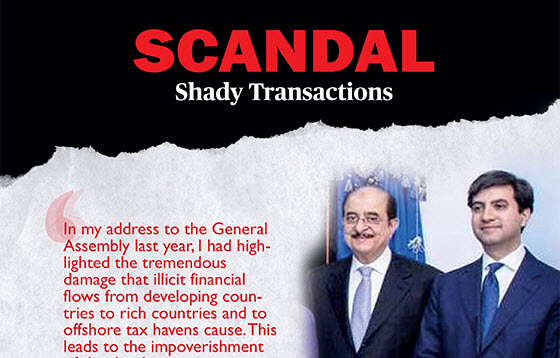 In his virtual address to the 75th session of the United Nations General Assembly, Prime Minister Imran Khan made a powerful case against money launderers, who siphon off massive amounts of foreign exchange from the developing nations to the rich countries and to offshore tax havens. He rightly complained about the lack of political will among the rich countries in taking on the issue because they remain the ultimate beneficiaries of the inflows of looted wealth.

“I call upon this Assembly to take the lead in efforts to build a global framework to stem the illicit financial flows and ensure speedy repatriation of stolen wealth,” the prime minister urged.

But Imran Khan’s apparent strong and uncompromising stand against money launderers carries a tinge of irony. While he is taking on powerful politicians and their cohorts for their alleged involvement in corruption and money laundering, some persons linked to his own government are not above suspicion.

And one such key character is Ali Jahangir Siddiqui, the Pakistan Tehreek-e-Insaaf (PTI) government’s ambassador-at-large for investment, appointed by the Ministry of Foreign Affairs to this position in “an honorary capacity” in June 2019.

Perhaps the prime minister and his core team remain unaware that the Confidential Financial Reporting Authority (CAYFIN) of the Cayman Islands has named both Ali Jahangir Siddiqui and his father, prominent businessman Jahangir Siddiqui, for “suspicious” money transfers.

In a letter dated December 16, 2019 (a copy of which is available with Monthly ‘Narratives’), CAYFIN has shared details of suspicious transactions made by the Siddiquis and their companies with the Director General of Pakistan’s Financial Monitoring Unit, which operates under the umbrella of the Finance Ministry.

The CAYFIN letter, giving an overview of the case, said that this business family established The SUN Trust and Akamoto Holdings Limited in October 2011. “The (SUN) Trust was to be ‘settled’ by Jahangir Siddiqui for the benefit of himself and his son, Ali Jahangir Siddiqui (100 percent).”

Their Accounts were opened with the Deutsche Bank Cayman Island Branch in 2011. However, Deutsche Bank sold its global operations to Butterfield Bank (Cayman) Limited, which scrutinized all accounts. During the scrutiny, the Butterfield Bank found irregularities in accounts held by this Pakistani business family and alerted the CAYFIN about the dubious transactions in its Suspicious Activity Report.

“In December 2011, the (Akamoto) Company received an amount of US$1.2m from an account with Goldman Sachs, Zurich in the name of the Rilera Financial Corp. These are the only assets of value to have been injected into the Trust, and a balance of approximately the same amount remains in cash in the Company as of date of filing this… Rilera was noted at the time of inception as being from the ‘settler’s’ family foundation,” the letter read.

The first twist in the tale, according to the letter, is that Jahangir Siddiqui refused to divulge information to the Deutsche Bank about details of his foundation, citing confidentiality with Goldman Sachs. This refusal raised a red flag among the Deutsche Bank officials, who marked Siddiqui and all his associated accounts for strict monitoring. Ali Jahangir Siddiqui controlled the family foundation at that time.

“Notes on file suggest that the client was informed that no further amounts could be injected into the structure in this way in future as it was anticipated between US$5-10m could be put into the trust,” the letter stated.

As Ali Jahangir Siddiqui was aiming to enter public life and hold public office, he was excluded from any benefit from the Sun Trust on July 7, 2017. Instead, his father appointed three grandchildren – Alia Siddiqui, Zara Siddiqui and Jehan Siddiqui — as beneficiaries. At that time, these grandchildren were aged between one- to two-year-old.

In August 2017, Ali Jahangir Siddiqui joined the PML-N government and served as a Special Assistant to the Prime Minister with the status of a Minister of State. A few months later, in March 2018, he was appointed Pakistan’s ambassador to the United States by then premier Shahid Khaqan Abbasi amidst concerns within the foreign office as well as sensitive institutions, including the top brass of Pakistan Army, over his inexperience and ability to hold this high-profile and sensitive position. Later, Ali Jahangir Siddiqui maneuvered effectively to become honorary ambassador-at-large under the Pakistan Tehreek-e-Insaaf government as well. The journey from being a close confidant of Shahid Khaqan Abbasi to holding office in Prime Minister Imran Khan’s camp is an astonishing story of political and business wheeling and dealing, which has also left many in the government camp aghast.

The Cayman Island authorities acknowledge that from 2013-18 “numerous investigations have been launched in Pakistan in relation to our client Jahangir Siddiqui, his financial services business and more recently Ali Jahangir Siddiqui in relation to embezzlement, insider trading, stock manipulation and money laundering.” According to the Butterfield Bank Suspicious Activity Report these accusations related to activities as far back as 2007.

The CAYFIN letter stated that Jahangir Siddiqui and Ali Jahangir Siddiqui “may be engaged in money laundering and that the funds received into the Trust structure, in whole or in part, directly or indirectly relate to the proceeds of crime.”

CAYFIN launched a through investigations into the business interests of the Siddiqui family and their companies.

Although no further records were available with Cayman Island authorities on the Siddiqui family and their companies, open source searches did give a glimpse of their shady past, according to the document.

The CAYFIN investigations and the letter gives details of how Ali Jahangir Siddiqi was summoned by the National Accountability Bureau (NAB) in a case in which he was accused of siphoning off funds amounting to 23.758 million euros in 2008 for the purchase of an Italian company, Monte Bello SLR. Ali Jahangir Siddiqui was the director of investment firm Azgard Nine Ltd at that time and he allegedly used a foreign company, Fairytal SRL, Sweden for this purpose.

NAB said that Fairtal SRL, which was used for the deal, suffered losses along with its shareholders because of the murky transaction.

The case of Agritech Limited was also highlighted in the investigations. Shares of this company were sold to various financial and government institutions at a price higher than the market rate to settle loan defaults, causing them a whopping  loss of Rs.40 billion.

Similarly, the Securities and Exchange Commission of Pakistan (SECP) in its 2016 report revealed that prices of Azgard Nine group’s share were artificially increased to Rs.70 from Rs.24, and payments were also made to an unidentified party.

However, none of these cases were brought to a closure because of the political and financial clout of Jahangir Siddiqui and his family. Both NAB and the SECP failed to follow through on these cases.

The CAYFIN letter disclosed that bank status of Akamoto Holding showed that out of the initial deposit of US$1.2 million from Rilera Financial Corp, Goldman Sachs Bank AG Zurich on Dec 1, 2011, US $950,000 was held in cash position, while US$250,000 was invested in the money markets.

The Akamoto Holdings Bond portfolio as on Dec. 31, 2018 comprised of $5,218,964 with the USD Market Value of $5,407,470.98. “Akamoto Holdings seems to be taking short term loans against these bonds to execute a variation of investments,” the CAYFIN letter said.

“We are of the view that there are reasonable grounds to suspect that the funds held by the Cayman trust and underlying BVI (British Virgin Islands) company might be derived from proceeds of criminal conduct,” it said, asking Pakistani authorities to contact them for further information.

“This information has also been disclosed to the Financial Crime Investigation Unit of the Royal Cayman Island Police Service for intelligence purpose only,” the six-page letter said.

The CAYFIN informed Pakistani authorities that it holds numerous documents provided by the Butterfield Bank on this business family and it should not hesitate to contact it for their copies.

However, the matter remains gathering the proverbial dust on the file in the offices of Pakistan’s Financial Monitoring Unit. And just as the NAB and SECP failed to actively move against this politically connected business family, the Finance Ministry’s Financial Monitoring Unit also seems to be following suit. However, it is also a test case for Prime Minister Imran Khan to walk the talk and while raising the issue of money laundering internationally and targeting rival politicians, also call for action against those powerful business interests that are now operating under his political umbrella.