On January 20, Joe Biden, President-elect of the United States, will be inaugurated as the 46th President of the United States. He comes to office after a bitterly-contested and divisive election. The question on policymakers’ minds is: what should we expect from the Biden administration after four years of Donald Trump?

This analysis is premised on the argument that, obvious though such a contrast might seem, it would be more pertinent to view Biden’s presidency more in terms of Barack Obama’s tenure when Biden was the vice president.

This is not to say that Biden is Obama; or, even, that Biden as vice president merely reflected Obama’s views. He did not. But he belongs to the same tradition which can variously be referred to as neoliberal, Wilsonian or liberal-internationalist.

Secondly, Biden is demonstrably the most experienced foreign policy hand to come to the Oval Office since George H.W. Bush occupied it. Biden also dealt closely with Afghanistan and Pakistan during Obama’s presidency. As he told former Afghan president, Hamid Karzai, he (Biden) considered Pakistan far more significant than Afghanistan. Yet, during the Obama presidency, US-Pakistan relations went into a nosedive.

By contrast, Trump’s mercurial approach notwithstanding, the last two years of Trump’s presidency actually saw Pakistan and the US working closely to cut a peace deal in Afghanistan. Relations might have improved further but for Trump’s bullying approach to China and continued cosying up to India.

This is what I wrote elsewhere in determining the contrast between Trump and the incoming Biden administration.
What is it that Trump did which Biden would not have done, or won’t do? The two are as different as chalk and cheese and yet, in many areas Trump’s approaches, in substance if not in style, weren’t much different from traditional US policies: China, North Korea, India, the Middle East, Iran (tougher), Israel (friendlier), Afghanistan (closer to Biden’s Vietnam trap argument and counterterrorism-plus approach than Obama’s decision to go for a surge). Where Trump diverged sharply was on climate change, promotion of liberal values and rights and treatment of allies, especially NATO allies.

To put it differently, when Biden begins his term, he will change course on issues where Trump diverged from standard neoliberal policies, while tweaking those where Trump sailed closer to the bipartisan consensus.
Five areas will determine US-Pakistan relations in the coming years: India, China, Iran/Saudi Arabia, Afghanistan and US investments in Pakistan.

Iran: Biden will dial down the maximum-pressure policy against Iran, but he will stick to the fundamentals of the US approach to Iran. That policy looks at Iran’s role in the Greater Middle East and considers it a threat to Israel. Biden has constantly declared “an ironclad commitment to Israel’s security” and it is highly unlikely that he will completely ignore Israel’s threat perceptions while dealing with Iran. However, while it will be difficult for Biden to walk back into the Iran nuclear deal, he could get the other parties to help Iran’s economy by supporting the deal from outside. That will, however, depend on Iran’s own actions with reference to the deal.

Saudi Arabia: Biden has talked about “ending our support for the Saudi-led war in Yemen.” But it is unlikely that he would move away from Saudi Arabia, a policy that is structurally guided, given several factors in the Middle East. However, he is unlikely to give Mohammed bin Salman, the de facto ruler of the Kingdom of Saudi Arabia, a pass on the latter’s more egregious policy decisions.

China: Biden has talked about mustering the support of US allies (which Trump “kneecapped”) to counter the China threat. His statements and the Foreign Affairs article make it clear that there is a bipartisan consensus in Washington DC on China. That said, he will be far more alive to the consequences of treating China as an adversary only. He will seek cooperation in areas of mutual benefit. China has already signed a trade agreement with the European Union and is the central plank of the Regional Comprehensive Economic Partnership, the largest free-trade bloc in the world. Trump, during his presidency, chose to opt out of the Trans-Pacific Partnership, then the largest trading bloc and which formed the core of Obama’s Pivot to Asia policy. Biden comes to the job with China already ensconced comfortably as the world’s leading state in terms of trade partnerships. Similarly, Biden would need China’s cooperation on climate change, another area whose science and urgency Trump could never fathom.

India: India has just signed the Basic Exchange and Cooperation Agreement, the last of the four foundational agreements with the US, and there is bipartisan consensus in Washington on India as a strategic partner. Not much is going to change on that count, unless Biden decides to take note of the grave human and religious rights violations in India. Three other factors will likely impact Biden’s approach to India: the rights violations in India (if the situation deteriorates); the Sino-India border dispute (if nothing untoward happens there) and Sino-US relations (if they improve). If these three factors work as listed, India could slide in the estimation of the Biden administration. That could have a salutary effect on US-Pakistan relations too.

Afghanistan: Biden is unlikely to depart in any major way from Trump’s Afghanistan policy. Even during the Obama years, he was more interested in counterterrorism operations than the surge. Also, the US peace deal with the Taliban has reached an advanced stage and there’s limited appetite in the US for continued troop engagement in Afghanistan. The Biden administration will continue to work closely with Pakistan to see this through. It will also demand that Pakistan make more efforts to get the Taliban to agree to a ceasefire. Violence levels have seen a rise in that country and that is a major cause for concern for everyone, including Pakistan.

Structural constraints limit a state’s foreign policy options and that is as true of the powerful states as the weaker ones.

US investments in Pakistan: Pakistan’s relations with the US, even in the supposedly halcyon days of President Ayub Khan, were transactional. The ebbs and flows have depended on when the US has needed Pakistan and how Pakistan has managed to take advantage of US needs. The last 20 years were no different and the coming four years won’t be either, if Pakistan cannot market itself in the US. That policy needs to understand the significance of entrepreneurial innovation, making the Pakistani market attractive for investment, increasing the market size and so on. These factors help a state interest other state(s) and denote positive engagement.

To sum up, if tensions in the Middle East come down, Afghanistan moves towards some stability, there is improvement in Sino-US relations and a scaling down of relations with India, US-Pakistan relations could see improvement. However, as argued above, for relations to become more strategic and less transactional, both sides would have to find areas of interest and increase cooperation in those areas.

Finally, structural constraints limit a state’s foreign policy options and that is as true of the powerful states as the weaker ones. Also, the conduct of foreign policy depends as much on exogenous actors and their actions, as it does on institutional thinking within the state. 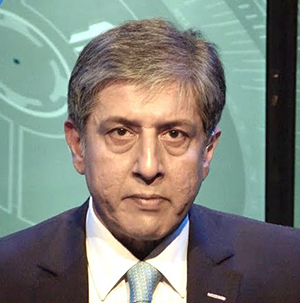 The writer is a senior journalist and political analyst

A Cry for Help