While two nations of the subcontinent celebrate their 75th independence day this year, the India-held territory of Jammu Kashmir has been bleeding profusely under the tentacles and clutches of New Delhi’s settler colonialism. Kashmir, predominantly a Muslim majority state, has since long been a victim of chaos, conflict and belligerent military occupation. Once hailed as a paradise and a true sanctuary of peace and tranquillity, this historic land has now been turned into a virtual hell for its own people.

Since 20th century, the region had been a battlefield of powerful emperors who invaded and ruled its people from time to time. Afghans, Sikhs, Mughals and Dogras are among those ruthless tyrants Kashmiris have ever seen. These rulers were uncultured and, in most cases, uncouth, accounting for the inhuman treatment of the Kashmiri people.

But what India has done with Kashmir and the Kashmiris during its past 75 years of illegal rule is something that finds no precedent in human history. Indian rulers proved to be the worst of all the tyrants.

Sufferings of the Kashmiris under Indian occupation

Since 1947, Kashmiris have witnessed immense hardships and miseries, including torture, rape, untold numbers of deaths not to mention the widespread destruction of the state and its economy. However, the last three decades have been the worst of all- in terms of brutality and barbarism unleashed upon Kashmiris by the Indian state.

Nearly a million military and paramilitary troops deployed in every nook and cranny of the valley have been involved in a slow-motion genocide that has led to uncounted deaths and human rights violations. A silent war the Kashmiris have become casualty of has been going on in the region for the past three decades. Over a 100,000 people mostly youth have been killed, whereas tens of thousands of people, between the age group of 15 to 30 who have been subjected to forced disappearances remain buried in unmarked graves discovered in many parts of the Kashmir valley.

August 5, 2019, marked a new low in India’s colonial history of Kashmir. It was the darkest day in Kashmir’s contemporary history when India’s racist regime-the BJP broke all hell in Kashmir before revoking article 370 and 35 A of the Indian constitution that guaranteed special status to Kashmir.

The valley of Kashmir reeled under a suffocating military siege and communication blockade for more than 14 months. Thousands of Kashmiris, mostly youth, were arrested under notorious Public Safety Act and sent behind the bars. Not to forget the hundreds of top-rank politicians who were arrested and booked under infamous laws and left to rot in jails outside the Kashmir valley. Millions of Kashmiris were virtually caged en-masse in their homes. A complete ban on all forms of media was imposed, the region was turned into an information black hole for the rest of the world to hush up the naked aggression.

The acts of brutality perpetuated during this tumults period have left bitter memories, some of which continue to persist to this present day. The essential fundamental freedoms including the right to freedom of speech and expression, the right to protest and peaceful assembly remain largely suspended in the valley.

While social, political and economic life remained critically suppressed, normal life in Kashmir remains still out of gear despite the passage of three years. And the hapless Kashmiris, who are battling for survival, continue to suffer under the prolonged military occupation.

There is no denying the fact that the Indian government’s August 5, 2019 action was a brazen violation of the UNSC resolutions and other relevant international treaties. But, the way the international community, especially the influential governments, watched the situation was simply disgusting.

Rather than holding the Indian government accountable, the world watched the abysmal situation in Kashmir like a silent spectator, this is perhaps the biggest reason that a rapidly growing global concern could not even break the vicious cycle of violence in the region.

The level of indifference and apathy with which the international community approaches the dispute has been one of the major reasons behind the continued bloodshed in the Kashmir valley. The inaction on the part of the global community is something that has emboldened and encouraged the government of India to carry on with its brutal policies of oppression and suppression to silence the Kashmiris.

Sadly, the Muslim world is completely silent and except issuing empty statements no practical measures were taken to alleviate the un-ending sufferings of the Kashmiris. Western and European countries by and large see the Kashmir problem through the Indian prism. Owing to their economic interests no country seems to be willing to take a categorical stand on the issue of Kashmir and the US, which has now embraced India as its strategic partner is watching the gory death dance in Kashmir as a silent spectator.

The prevailing political and economic instability in Pakistan is another important factor that has a direct bearing on the Kashmiris’ freedom movement.

So long as realpolitik steers dynamics of the Kashmir dispute at the international level, people of the Indian occupied Kashmir will continue to suffer.

The United Nations (UN) has time and again expressed its concern and compassion for the innocent and oppressed people of the world. It has been a beacon of hope for Kashmiris too, but its lackadaisical approach has raised many questions over the forum’s impartiality.

In the case of Kashmir, the forum (UN) has not shown the amount of interest it had shown in resolving the issues like East Timor and South Sudan.

Despite the fact, Kashmiri people still maintain a degree of faith, believing that the UN will take note of their sufferings and take necessary initiatives to end the agony endured by them over the past 75 years.

Sadly, the successive Indian governments took advantage of the situation and used jackboot tactics to exercise its stranglehold over the territory. While exploitation of Kashmiris’ resources, killing and maiming its population through heavy militarization has been a consistent policy, New Delhi has been practicing religiously since the day its forces set foot on Kashmir’s soil.

What Kashmiris are asking for?

All that Kashmiris demand is that the UN, which acknowledges Kashmiris’ right to self-determination through a number of its unanimously adopted resolutions, should fulfill its promises and proclamations regarding the right of every human being to live in peace and practice self-determination.

The suffering humanity in Kashmir demands the august forum to vigorously support the relevant resolutions on Kashmir and impress upon the government of Indian to implement these resolutions, which upheld the rights of the Kashmiri people to self-determination.

Fulfilling the explicit commitment made to the people of Kashmir is the only way out to resolve this lingering dispute that has been major cause and consequence of unrest in the region.

Pertinently, the main cause behind the continued conflict is the perpetual denial of the right of self-determination and the anti-democratic policies pursued by the Indian government.

An early solution of the Kashmir problem will be of great benefit not only to the people of Kashmir but teeming millions of both India and Pakistan who have been craving for a better future.

Since the principle of right to self-determination continues to guide the UN in its decolonization efforts and freeing people from the clutches of foreign occupations grant of a plebiscite to the people of Kashmir in line with the UNSC resolutions remains the only viable option to settle this long-drawn conflict that poses existential threat to Kashmiris who have already lost their three generations during their decades’ long struggle for right to self-determination. 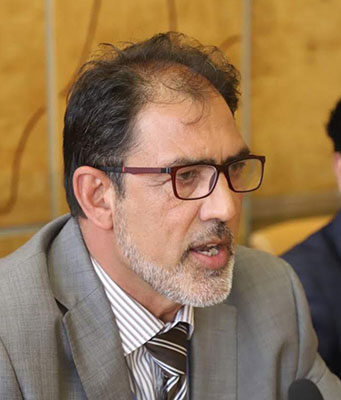