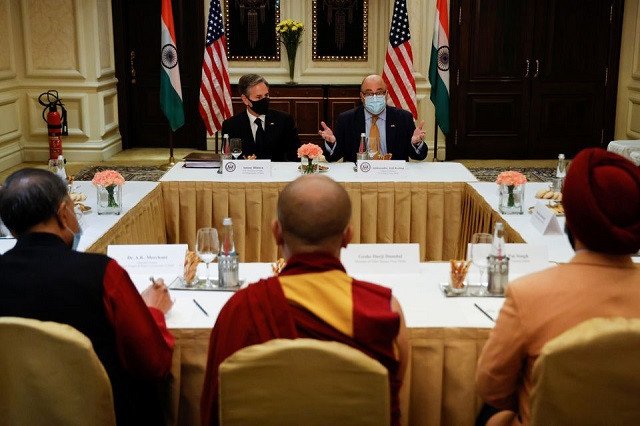 In his first official visit to New Delhi, US Secretary of State Antony Blinken delivered a cryptic warning about India’s democratic backsliding.

Civil freedoms and the room for dissent are increasingly under assault in the world’s largest democracy under Prime Minister Narendra Modi’s administration, according to rights organisations.

The US and India “take seriously our duty to provide freedom, equality, and opportunity to all of our people,” Antony Blinken said during a joint press conference with Foreign Minister Subrahmanyam Jaishankar. “We realise that we must always do more on these fronts,” he continued, “and none of us has attained the goals that we set for ourselves.”

Blinken said that democracies should “always strive to improve our democratic institutions, increase access to justice and opportunity, and stand firm for basic liberties.” India has increased its use of anti-terrorism and “sedition” laws to arrest activists, journalists, students, and others during Modi’s leadership.

The Modi government has also enacted laws that discriminate against India’s Muslim minority of 170-million people.

The administration denies retaliating against critics, claiming that members of all faiths have equal rights.

Indian officials were said to have voiced concern behind closed doors about Taliban advances in Afghanistan and urged Blinken for greater help in the border stalemate with China.

Relations between India and the United States have always been tense, but China’s increasing aggressiveness has pushed them closer together, especially after fatal skirmishes last year on the disputed Indo-Chinese Himalayan border.

However, Brahma Chellaney, a strategic affairs specialist at India’s Centre for Policy Research, believes that US support has “slipped a notch” since Joe Biden took over as president from Donald Trump in January.

“India is engaged in a military confrontation with China, but unlike senior Trump administration officials who openly denounced China’s aggressiveness and supported India, no one in Team Biden has publicly endorsed India,” Chellaney added.

President Biden’s “hurried and poorly planned departure from Afghanistan” has enraged New Delhi even more, according to Chellaney.

Delhi is concerned that a Taliban takeover would transform the nation into a safe haven for terrorists planning attacks on India.

Due to the deteriorating security situation, India, a staunch supporter of the Afghan government with billions of dollars in development assistance, recently evacuated 50 employees from its Kandahar consulate.

Despite removing troops, US Ambassador Antony Blinken said at a press conference that the US “remains extremely involved” in supporting the embattled Afghan government, providing security and other assistance.

“There needs to be a peaceful resolution,” Blinken said, adding that the Taliban and the Afghan government must come to the table.