Gazing Down the Precipice

Faiz’s rendering above, and so much else in the poet’s anthology, are reflective of a sombre mood which reflects a state of disappointment, but it is never denuded of hope. One can easily find a connection with the existent state of the country. This story of misery is long and grim, making one virtually lose faith in humanity, more particularly those who are at the helm and in whose hands resides the fate of the country and its people.

It is difficult to decide where to begin. Do we begin with the Quaid’s message of 11th August and the hope it ignited only to be cruelly extinguished within weeks with the speech itself not finding a mention in the national parlance for a number of years.

It is like that these words were never spoken as leaders following him had a different vision of how Pakistan should be administered. From a liberal and progressive country as envisioned by Quaid-e-Azam Muhammad Ali Jinnah, it was turned into a regressive society where human beings gloated in sitting on judgement on others’ faith; where crime and corruption became the favourite sports of the leaders; where functioning of the courts was shorn of justice; where the bureaucracy kept reigniting its deep penchant for them being the masters of all they surveyed and others their servants; where politics became a means for accumulating pelf; where power was misused to eliminate adversaries; where subjecting the weak to humiliation and torture became favourite sports; where rape and arson became symbols of chauvinistic pride; where nobody cared about any of this except ensuring that they remained secure even when a bulk of the population was dying of starvation.

Should we begin with the loss of morality and the fogging of the line that differentiates the good from ugly, honesty from dishonesty, greed from contentment, righteous from fraudulent, and just from unjust? Or should we begin when the extremes of right and wrong are merged to ensure that none of these would remain discernible and things would be administered just as they would be in a crime land? It is this grave travesty which has ultimately removed the foundations from under the edifice of the country which, having become wobblier with time, is practically on the verge of collapsing. The state is now completely in the control of a cabal of convicts, criminals and absconders who are making use of every power vested in their offices to ensure that their crimes do not remain punishable under self-serving enactments they have incorporated in the relevant laws. Together with support from their patrons, every institution of the state has been rendered dysfunctional and forfeited to the control of crooks.

These acts are guided by an insatiable stock of shamelessness. The ones guilty of having brought the country to the edge of the precipice feel as if it is their inherent right to do as may please their fancy and, in doing so, they would not be accountable before anyone, not even the state institutions. They believe that they have a prerogative to amend the laws even if it would be for their own exclusive benefit. They believe that they can continue with a parliament which is without the country’s largest political party and, by far, the most popular, and still call it democracy. They believe that violating the constitution is no crime because it is but a stack of papers which can be torn away. They believe that use of brutal, barbaric and fascistic tactics to humiliate and torture the opposition into submission is part of their (non)electoral mandate. They believe that the judiciary is there to serve their interests and its judges can be ordered on phone and their chief justice and his court attacked if he would try to deviate from their commands. They believe that bureaucracy is a group of handpicked cronies and sycophants who are fed on pelf and who would always be at their beck and call, with their tails wagging.

They believe that, just like the political parties they operate as private limited companies, the country is their personal fiefdom reflecting their dynastic ambitions, and they are the anointed leaders who are beyond committing a fault. They believe that they are within their right to use every conceivable lurid and immoral tactic to keep the voice of conscience at bay. Quite simply, they believe that they are here to rule and they shall do so no matter what may be the cost to the state and its stature and standing in the world.

There are people out there who are trying, but they cannot do it alone. Everyone has to contribute their bit. That will not happen by remaining detached from what is going on as people are out on the roads, fully charged with the passion of bringing about a change in the country by burying a putrid past and raising the edifice of a new charter which would be embedded in the enshrining principles of the country’s creation – shaping a welfare state, devoted to the wellbeing of its people and based on the enduring principles of justice, equity and equality.

The existent system has lived its life. It is rotting and its stink can be felt a million miles away. This must go without any further loss of time as its continuation can only bring damage and destruction for the country and its people. The national assets have already been mortgaged for securing further pelf for the cabal of criminals who have been handed over the charge of managing the country in grave violation of every living principle, every living streak of morality. Like in the past, they set about skinning the country further. The fear is that, by the time they leave, there may be no country left to guard for such has been the gruesome complicity among like-minded actors and players who believe that corruption is unimportant.

The country has been split apart by conflicts and contradictions which have been wilfully fabricated to keep people occupied with the struggle for their continued survival. For a while it seemed that this wicked stratagem may be working, but the afflicted people are out fighting for their rights. Their voice is gaining traction with every day that passes. They look unstoppable, but they need the support of everyone who cares about this country and who wants to save it from going down eternally. It is now, or it is never.

As Charles Dickens said, “it was the best of times, it was the worst of times”. Let us try to bury the worst of times in a past that Pakistan and its people have endured with pain and suffering and which has brought us to the verge where we are gazing down the precipice. Let the best of times reflect a future that spells a change from a putrid and decayed system that has been the cause of uninterrupted torture. Right now, this future is being scripted on the streets and roads of the country. It is the duty of us all to put in our bit to make the miracle happen. 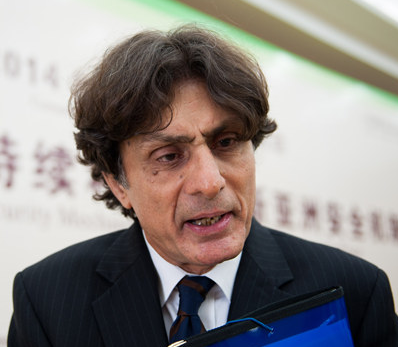 Raoof Hasanhttp://narratives.com.pk
The writer is a former Special Assistant to the Prime Minister on Information.
Previous articleDifficult Choices
Next articleReligious Minorities & Pakistan

The evolving of journalism