Making no significant to launch initiatives to bridge the country’s gender gap, Pakistan was ranked at 145 among 146 countries on the Global Gender Gap Index.

According to the World Economic Forum’s Global Gender Gap Report 2022, women labour-force participation in Pakistan declined by 1.9 per cent points in 2022, regressing in its gains from the last few years. Bangladesh at 71 leads South Asia, while India at 135 struggles in bridging the gap. Iceland leads with the top position across the world.

Pakistan at 145th among 146 countries has a population of 107 million women, and in 2022 has closed 56.4 per cent of the gender gap that affects them. This is the highest overall level of parity Pakistan has posted since the report launched, 16 years ago. 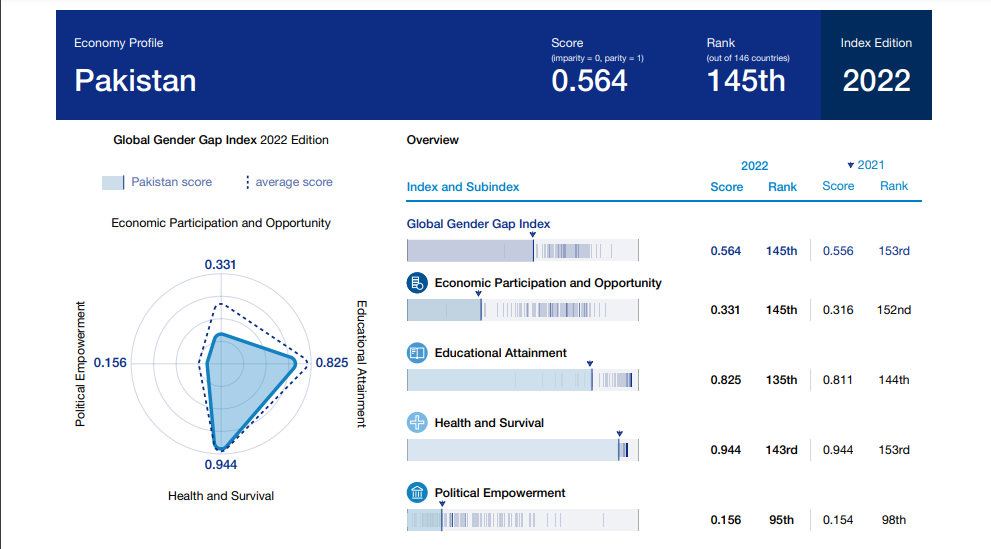 South Asia with 62.3 per cent gender parity, has the largest gender gap of all regions, with low sco per centres across all measured gender gaps and little progress made in most countries since the last edition. At its current pace, it will take 197 years to close the gender gap in the region. The economic gender gap has closed by 1.8 per cent, with increases in the share of women in professional and technical roles in countries including Bangladesh and India, as well as Nepal.

The report suggests that of the 146 economies surveyed, just one in five has managed to close the gender gap by at least one per cent in the past year. As a result, while gains have been made in the past year, they have reduced the time it will take to reach gender parity by only four years. This progress does little to offset the setback of an entire generation recorded in 2020-2021 at the start of the pandemic.

“The cost of living crisis is impacting women disproportionately after the shock of labour market losses during the pandemic and the continued inadequacy of care infrastructure. In face of a weak recovery, government and business must make two sets of efforts: targeted policies to support women’s return to the workforce and women’s talent development in the industries of the future. Otherwise, we risk eroding the gains of the last decades permanently and losing out on the future economic returns of diversity,” WFE Managing Director Saadia Zahidi.

For the 13th consecutive year, Iceland is the most gender-equal country in the world and the only one to have closed more than 90 per cent of the gender gap.

Countries that invest in all of their human capital and make it easier for their populations to balance work and family life tend to be more prosperous. With an increasingly uncertain economic outlook, the Global Gender Gap Report 2022 calls on more leaders to unleash the creativity and dynamism of their countries’ human capital to overcome the current crises and accelerate a strong recovery.