Prime Minister Imran Khan claimed on Sunday that foreign powers were in play to topple the Pakistan Tehreek-e-Insaf government.

The premier put together a power show—Amr-bil-Maroof— in Islamabad’s Parade Ground ahead of the vote of no confidence against the prime minister in the National Assembly.

Showing a letter as proof of his claims, the premier stated that foreign elements were using local politicians to change the country’s foreign policy.

The premier said that the government was being threatened into changing their foreign policy but he was not going to bow down to them.

“I wrote this speech today so that I don’t get emotional and say anything which can affect our foreign policy,” said the premier while claiming that foreign elements were involved in changing regimes in Pakistan.

He said that Foreign Minister Shah Mehmood Qureshi and the other leadership has been aware of this conspiracy against the government for months.

“This is not Zulfiqar Ali Bhutto’s era. You only cross the river once,” he told a charged crowd.

He further said that Pakistan will not be a slave to another nation.

“We will be friends to other nations but will not be dictated by anyone,” he added. 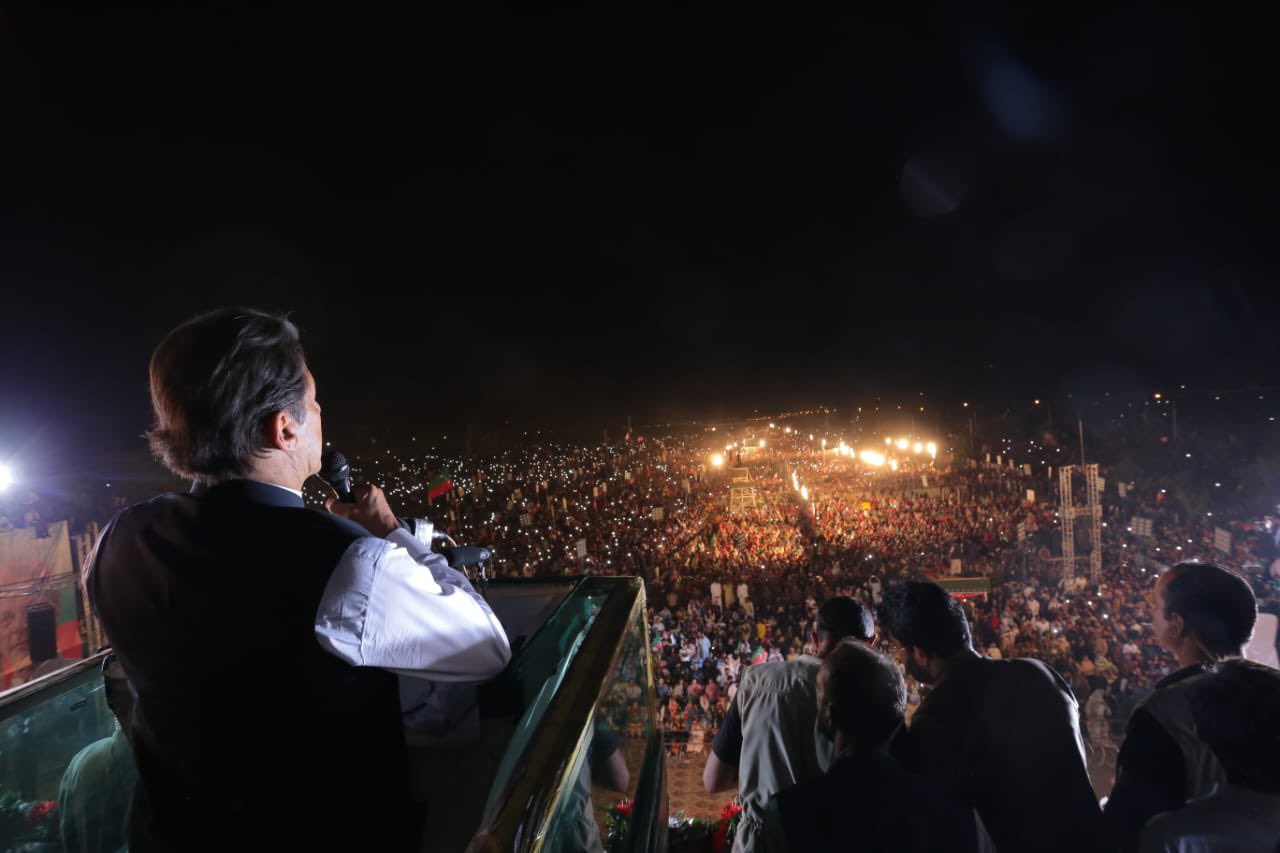 In a reference to Nawaz Sharif, Imran questioned who was the PML-N leader meeting and who was ordering the characters in the country.

He further said that the only reason he is not naming the forces is that he does not want Pakistan to suffer.

Prime Minister Imran Khan has expressed the resolve to make Pakistan an Islamic welfare state on pattern of the State of Madina as established by Holy Prophet Muhammad (Peace Be Upon Him).

He said corrupt elements have been plundering the national wealth for 30 years and now they are trying to blackmail him by moving a no-confidence motion against him.

Imran Khan said he will not compromise on supremacy of law to put the powerful under the ambit of law that is why no NRO will be given to corrupt.

Imran Khan said with the growth in tax collection, the government gave a subsidy of Rs2.5 billion, reducing the prices of petrol, diesel and electricity.

Imran said that the opposition was conspiring and bribing MNA to oust the government.

“I will not spare corrupt leaders even if I have to step down,” the premier said adding that the public has proved today that they stand with the good against the evil.

Speaking about Pervez Musharraf, the premier said that the former president hurt the country most giving the ‘three stooges’ NRO.

He went on to say that the NRO gave the leaders a free hand to do corruption for a decade.

The premier said that Pakistan could only prosper if it followed the path set out by Prophet Muhammad.

Reiterating his idea of Riyasat-e-Madinah, Imran said that the Pakistan Tehreek-e-Insaf wanted to impose the law set down by Islam in the country.

He said that the PTI has brought in legislation giving women their right to inheritance.

The premier further stated that Pakistan fared better than other South Asian countries during the coronavirus.

He further went on to say that Pakistan has improved its agricultural exports and have managed to break previous records.

Imran said that the industries too have improved.

“We are moving towards industrialization,” Imran said adding that the PTI government stands with its industries making things easier for them.

Imran said that PTI, working with banks, have made housing schemes accessible for the common people.

He went on to say that PTI took up the challenge of solving Pakistan’s water problem by creating dams.

Crediting PTI, he said that the government managed to evade the $11 billion in the Reko Diq case adding that the same company is now ready to invest $9million in Balochistan.

He further said that his government also managed to end the case against Pakistan in the Rental Power Project case.

Previous articlePTI power show underway in Islamabad
Next articleAll eyes on NA as it meets with no-trust motion against PM on agenda
Narratives Web Deskhttp://narratives.com.pk

TV One is again offering a great mix of...

Response sought from political parties in plea against D-Chowk rallies

Govt to file reference in SC to interpret Article 63-A