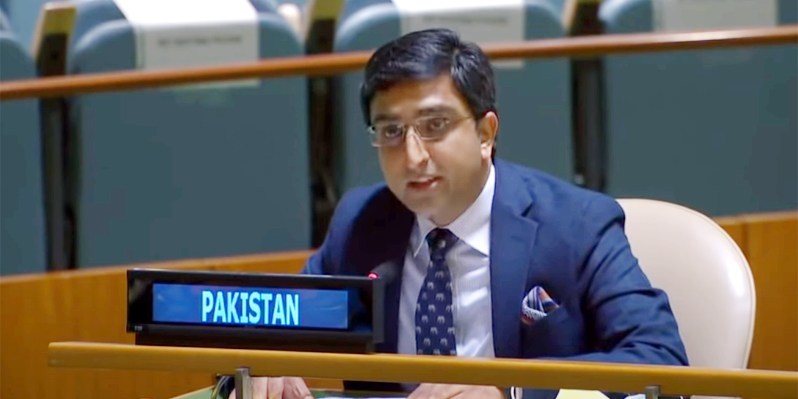 UNITED NATIONS: A United Nations General Assembly session on Friday saw Pakistan and India clash over each other’s record on the protection of minority rights.

“This is not the first time India has tried to feign concern for minority rights elsewhere while being the most egregious and persistent violator of minority rights itself,” claimed Pakistani representative Zulqarnain Chheena, repudiating India’s “unwarranted assertions” that the burning down of a Hindu temple in Karak Tehsil, Khyber Pakhtunkhwa had been carried out with the “explicit support” of Pakistani authorities.

The Indian representative declared that it was “ironic” that Pakistan had co-sponsored a resolution against damage to and destruction of religious sites, arguing that “the resolution cannot be a smokescreen for countries like Pakistan to hide behind.” The resolution was proposed by Saudi Arabia and has been co-sponsored by several other Arab nations.

Chheena highlighted India’s hypocrisy on minority rights, reminding the “RSS-BJP regime” of its “gross and systemic violations of the rights of minorities, in particular Muslims.” As evidence, the delegate pointed to the Citizenship Ammendment Act, the 2020 Delhi pogroms, cow vigilantism, the inhumane lockdown of Kashmir and the extra judicial killings of Muslims motivated by ‘love jihad’ conspiracies.

In recent years, there has been growing concern among international human rights organisations over the discriminatory policies and minority-targeted violence of the Modi regime. Furthermore, the BJP government has taken several steps to prevent outside scrutiny of its progress, or lack thereof, on minority and human rights, including freezing the assets of the Indian chapter of Amnesty International last year.

The spat in the General Assembly followed the release of transcripts, earlier in the week, by the Mumbai Police that showed controversial Indian anchor Arnab Goswami had prior knowledge of the Balakot airstrike.

In a press release, Pakistan’s Ministry of Foreign Affairs claimed this was further proof that “The BJP government stages “false flag” operations; maligns Pakistan with terrorism-related allegations; stokes hyper-nationalism in the country and then deviously manipulates national sentiment in its bid to win elections.”

The foreign ministry went on to state that “Pakistan would act firmly and responsibly in the face of India’s provocations” and hoped that the international community would now become more cognizant of India’s reckless behaviour and hold it accountable.