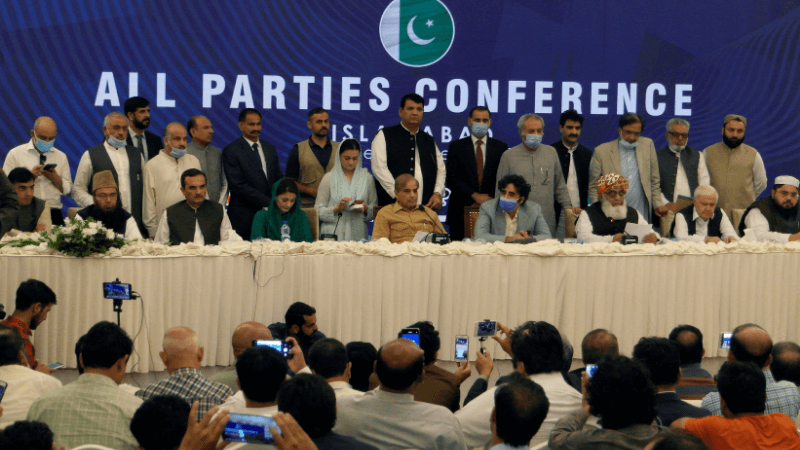 The newly-formed opposition alliance, the Pakistan Democratic Movement (PDM), is trying to raise the country’s political temperature and whip up a storm against Prime Minister Imran Khan in the coming weeks. Whether it will it succeed in its mission remains to be seen.

The stated target of the PDM is not just Imran Khan’s government; it also aims to change Pakistan’s political matrix by taming the mighty military establishment, which is being viewed by the main opposition parties as the reason for the repeated fall from grace of two major political dynasties — the Sharifs and the Zardaris/Bhuttos — on charges of corruption, misrule and abuse of power.

Nawaz Sharif and his loyalists in the Pakistan Muslim League (PML-N), and the Jamiat Ulema-e-Islam (JUI) of Maulana Fazlur Rehman are packaging their narrative as a battle by the civilian leadership to wrest control from the military, who they see as the real power behind the PTI government. This narrative is also being echoed by the smaller nationalist groups. However, the Pakistan Peoples’ Party (PPP) appears to be playing it safe and despite being part of the PDM, it has not aligned itself with Sharif’s radical anti-army stance, highlighting the distrust and fissures within the opposition camp.

The party is trying to keep its options open because it rules Sindh and has a stake in the system. Any change in the power corridors that leaves the PPP high and dry and does not guarantee it a bigger slice of cake than it already has, does not suit it. For the PPP leadership to be playing second fiddle to the PML-N in the opposition alliance — the first time in the party’s history — is already a big climb-down.

Sharif’s radical stance, though not fully owned by many even within his own party, is certainly music to the ears of a fringe section of society that traditionally maintains an anti-military bias and position. However, it is not a view held by the masses, who still regard Pakistan’s Armed Forces — the Army, Navy and Air Force — as the most trusted institution in the country and any attempt to make them controversial or bring their leadership into disrepute will not go down well with them. Additionally, they maintain that Sharif’s stance is not entirely objective because military interventions in politics were often the result of the political leadership’s failure to act democratically and its attempts to weaken and undermine institutions, triggering an overt or covert chain reaction.

In fact the weakness, inefficiency and corruption of civilian institutions has paved the way for the involvement of institutions such as the judiciary and the military in the democratic process. Unfortunately, these interventions were merely stop-gap measures that did not help to set things right.

However, since 2002 there have been regular and timely elections and an uninterrupted and orderly change of government in a constitutional manner. Yes, there were periods of uncertainty and faces changed at the Prime Minister’s House before they could complete their term, but these challenges, too, were handled within the constitutional and legal ambit, which is a huge step forward.

In a way, Pakistan’s flawed democracy is on track, but it still has a long way to go to become genuinely pro-people. The parties need to practice internal democracy and grow out of dynastic politics — be it at the national or constituency level; further they have to rid themselves of corruption and the politics of patronage. Without indulging in some serious self-criticism and self-correction, Pakistan’s political parties can never serve the interests of the people.

It is no secret that it is the pressure of accountability that has forced the opposition parties to close ranks. While the PML-N and the PPP leaders maintain that they are being pushed against the wall, Maulana Fazlur Rehman is still bitter and angry about his personal defeat in the 2018 elections. However, each of the opposition parties have separate agendas and interests, which have converged, rightly or wrongly, because Prime Minister Imran Khan has taken them on, all at once. Had Khan been a conventional politician, he would have divided the opposition by going soft on one party and harsh on the other, but that is not his style of politics. But his passion for accountability comes with a hefty price tag.

Apart from the accountability process, which has united the opposition, the PTI government is also reeling from several self-inflicted wounds. Topmost among them is the choice of Usman Buzdar as Chief Minister of Punjab — the main battle ground — which has become the soft underbelly of this government. Then, the unfortunate delays in decision-making, the PTI leadership’s own inexperience coupled with the kind of economic and political challenges it inherited on assuming power and its slim majority in Parliament that prevented it from pushing the reform agenda — all have, cumulatively, provided the opposition an opportunity to up the anté.

But the PTI government has not yet lost steam. Its prime minister still remains a popular leader and is untainted by corruption scandals unlike his main political rivals. Morever, the PTI is the only political force which has roots in all four provinces of the country, cutting across barriers of ethnicity, sectarianism and provincialism, thus making it a formidable force on the ground. Furthermore, it is the only party which has cordial relations with the military. Given these factors, Imran Khan and his team are unlikely to prove a pushover for Sharif’s bandwagon, as many in the traditional, mainstream media are predicting.

Accountability may be an issue for a few within the political elite — read the Sharifs, the Zardaris and their close associates — but it is not so for the masses. It does not hurt the common man, and seeing the mighty fall to the ground on charges of corruption, acts as a catharsis for many. The mantra of unfair accountability by the opposition is unlikely to cut any ice with the awam nor will Sharif’s attempts to paint the military leadership in black.