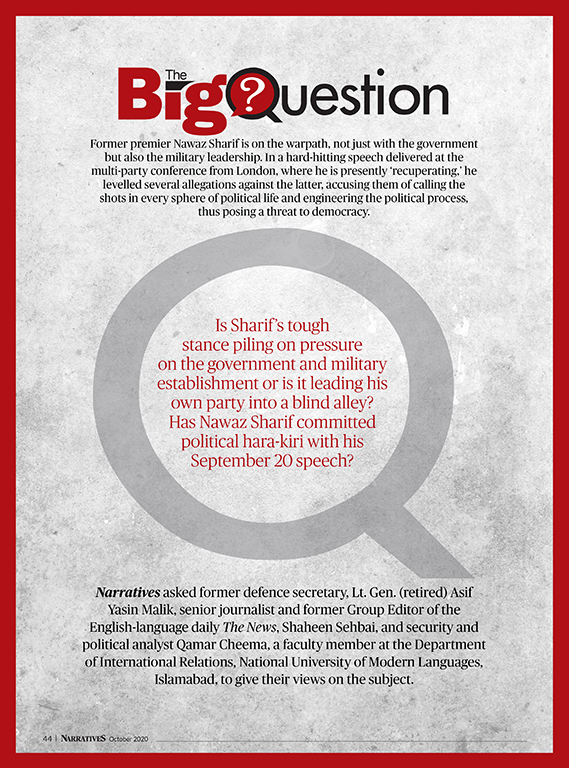 Former premier Nawaz Sharif is on the warpath, not just with the government but also the military leadership

Former premier Nawaz Sharif is on the warpath, not just with the government but also the military leadership. In a hard-hitting speech delivered at the multi-party conference from London, where he is presently ‘recuperating,’ he levelled several allegations against the latter, accusing them of calling the shots in every sphere of political life and engineering the political process, thus posing a threat to democracy.

Is Sharif’s tough stance piling on pressure on the government and military establishment or is it leading his own party into a blind alley? Has Nawaz Sharif committed political hara-kiri with his September 20 speech? 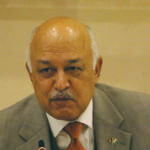 Mian Nawaz Sharif delivered his controversial speech from the United Kingdom, which has become a ‘safe haven’ for many politicians and businessmen from Third World countries, who have either been convicted for financial fraud and stealing public money or stand accused for such white-collar crimes.

Followers of Sharif and his family celebrated his “contentious” remarks with fireworks.

The speech Sharif delivered at the multi-party conference was the kind one expected from the so-called shining star of what we call ‘democracy’ in Pakistan. One has not forgotten his infamous ‘dictation’ speech and several other speeches in which he presented himself as the ‘knight in shining armour,’ but crumbled in a matter of hours when faced with the challenge of walking the talk.

In his latest outburst, Sharif read from a script written by those who wish to portray him as a warrior, which he certainly isn’t. And in his exuberance, he lost sight of the very objective of the speech and ended up following a path that could lead him into complete political wilderness. A leader must have the vision to see beyond his nose. Sadly, Mian Sahib only exhibited his political short-sightedness through this speech and disappointed those few in the establishment who still believe that there remains a streak of leadership in him.

The PML-N has always been seen as establishment-nurtured party; consequently many of its leaders and followers support a pro-establishment stance. Unfortunately, Sharif has yet again, forced the establishment to take the unprecedented step of coming out in the open to make clear its own stance through the statement of the DG ISPR.

Nawaz Sharif’s speech was preceded by several PML-N leaders‘ desperate attempts to mend fences with the establishment, end the distrust between them and create a favourable window for their party in Pindi and Abpara. This episode has exposed the disjointed and contradictory approach of the PML-N leadership.

The greatest beneficiaries of Sharifs’ ill-timed and ill-structured diatribe are the PTI and the PPP. Both these parties are in power — the former at the Centre and the latter in Sindh — and are greatly dependent on the support of the establishment, which could improve further, given the latter’s strained relationship with the PML-N. Also, the pro-Shehbaz Sharif lobby within the party would be quite happy with the Nawaz group’s confrontationist path as it could eventually open the doors for their faction within the party, which believes in reconciliation and national consensus to take the country forward.

Overall, Nawaz Sharif’s controversial speech will have a positive impact on Pakistan’s political landscape. Why? Because it has further exposed many of the leading politicians, including Nawaz Sharif, in their true colours. The earlier this mess is cleaned up, the better it will be for Pakistan.

There is also a lesson in all this for the establishment: the further it stays away from politics, the better it would be — especially for the political process. It would force the leadership to focus on grassroots politics and the welfare of the masses rather than lean on the establishment’s support. In any case, in spite of helping these leaders at one time or the other, the establishment ends up being blamed for the deeds and misdeeds of these politicians and their respective parties. 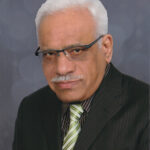 Two years down the road, Nawaz Sharif is still harping on the theme of rigging in the 2018 polls and blaming the army in what appears to be an act of desperation.

He fails to realise that he has missed the bus. His party had not lost the elections by a wide margin. In fact, the PML-N had won a considerable number of seats both at the federal and Punjab levels. And had he immediately challenged the validity of the polls and refused to accept the results, there was a chance that some constituencies might have been opened and a thorough probe conducted. But that was not done, despite Imran Khan’s offer to open any number of constituencies.

If discrepancies and rigging had then been established at the time, it would have raised questions about the entire polling exercise. And Khan might have been persuaded to go for re-election in all constituencies.

Nawaz did not challenge the results; in fact, he even rebuffed Maulana Fazl-ur-Rahman when he suggested that the Opposition should not take oath in the new assemblies. But poll results aside, Nawaz was overwhelmed in the game of wheeling and dealing that takes place after every election. If truth be told, he was no longer the “darling” of the Establishment, as he had been for years. A new man had stepped into that “coveted” position.

Then came the Panama papers that sent alarm bells ringing for the Sharifs. Nawaz was shown the door and no one came to his rescue. He had been abandoned by his erstwhile patrons. And now by blaming them in his September 20 speech, he has thrown his own family and his party into jeopardy.

Meanwhile his brother Shehbaz, who rightfully claims to be his political heir, having served as second fiddle for years, has openly advocated a no-confrontation policy with the Establishment and has always maintained his links with them, mostly to seek favours for his elder brother.

However, the tussle for the throne within the family and the confusion in the narratives of the brothers has subverted most of Shehbaz’s appeasement efforts. In fact, Nawaz’s speech proved to be the last nail in the coffin.

Maryam Nawaz is pushing hard for a confrontation and Shehbaz Sharif has been thrown under the bus, both by her and her father.

The party cadres are bewildered because the PML-N was never known to have the genes to become a revolutionary party under the leadership of a “fake” Che Guevera, who was born and nurtured in the nursery of the military establishment.

It appears that for now Nawaz cannot, or will not, return to Pakistan. He appears to be following in the footsteps of MQM founder, Altaf Hussain.    And even if Imran Khan and Rawalpindi were to end up having a major squabble that spins out of control — chances of which are remote — it would be extremely hard for Nawaz to stage a comeback. He comes with a heavy baggage — and no one wants to carry excess baggage any more. 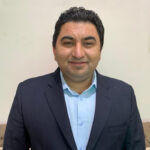 Pakistan’s political temperature has been on the rise since 2018 because a relatively new political party, the PTI, emerged as victor with a slim majority in the last general elections, breaking the status quo and challenging the strength of the two former ruling parties.

Since August 2018, the opposition parties, which are outside the power matrix, are being actively pursued by the National Accountability Bureau (NAB) on corruption charges, although the majority of these cases were registered during their own tenures. Many opposition leaders, who are in jail or living abroad, believe that they could politically engage the military establishment to clear their way back into the political arena.

At the recent multi-party conference, Nawaz Sharif announced that his struggle was not against Imran Khan, but against those who brought him to power, shifting the discourse towards the alleged interference of the establishment in political matters, which is neither good for democracy nor for the leadership in the security apparatus.

Pakistan’s national security leadership would not like to be dragged into politics as this compromises their reputation and professional responsibilities. But at the same time, civilian leaders should also refrain from outsourcing their responsibilities to the military and instead, engage with the country’s political forces in a mature manner to strengthen the democratic culture.

After Nawaz Sharif’s speech, the trust deficit between the elected and unelected offices has increased. This is evident from the DG ISPR’s disclosure that former Sindh governor Muhammad Zubair met with the COAS, Qamar Javed Bajwa, and allegedly pleaded Nawaz Sharif and Maryam Nawaz’s case. This was followed by opposition leader Shehbaz Sharif’s arrest, giving the Nawaz Sharif-led opposition more space to toughen its anti-establishment stance.

Nawaz Sharif’s decision to confront both the government and the establishment at the same time will help Imran Khan, who is banking on a hybrid political system because of his slim majority in Parliament. Khan’s decision to bank on the establishment rather than engage with the opposition, makes it clear that he does not believe in political consensus, which is not a good omen for democracy.

However, the government can only come under pressure if it loses the support of its coalition partners in parliament, and the establishment. On the other hand, Nawaz Sharif and Maryam Nawaz’s tough stance could create problems for supporters of their narrative in the PML-N. They may have to face corruption cases. Incidentally, many members of the PML-N have come to realise, to their dismay, that when the PML-N leadership engages with the establishment behind closed doors, they are not taken on board. This has created a lingering distrust even within the PML-N itself and the House of Sharif. Such divisions could limit the PML-N’s capacity to go full throttle on the confrontation path.

The opposition parties are well aware that they cannot bring down Imran Khan’s government immediately, but challenging him can create an environment which would help them win the 2023 elections.