The ‘one percent’ Pakistan

The topic of my talk is “opportunity.” I was asked to talk about opportunities for the young people in Pakistan. I said that I am going to give a talk, but it would be slightly different. My talk today is about the ‘one percent society.’ Because in Pakistan, we only provide opportunities to the top one percent, not to the rest of the population. So, if you belong to the privileged one percent then you will have a lot of opportunities. But if you don’t belong to that privileged one percent then sorry… opportunities are not for you. The appropriate name for Pakistan really should not be the Islamic Republic of Pakistan, but it should be called the ‘One Percent Republic of Pakistan.’

Now let’s do a mental exercise buying a farm. Suppose we buy a farm with a horse stable, which has 100 horses. And when you buy the farm, you ask the manager ‘what do you do?’ The manager replies that ‘every year we send one horse to a very competitive local race.’ You ask ‘how does the horse do?’ He replies that ‘every year our horse comes near the bottom.’ When asked which horse he sends, the manager says that ‘we used to have a horse named Babur. Once Babur died, we started sending his son Humayun. They both finish last, or second to the last.’

Naturally, you ask why the manager doesn’t have all the horses in the stable race with each other, and send the fastest one to the race. But the manager remains adamant, ‘this is not how we do things here. We just send Humayun every year.’ This captures how we do things in Pakistan.

We don’t give opportunities to all the Pakistani kids. We don’t try to find out who is the smartest or the most capable. We just repeatedly allocate opportunities to the same people again and again. So, we have effectively limited our talent pool to the ‘one percent.’

Obviously, if you limit yourself in such a way, you do not get the level of talent that countries who open the field to all of their people get. Now the entire world is dominated by elites, regardless of the society. Therefore, Pakistani society is not exactly unique in the sense that we have elite privilege, but we are a more elitist society than most.

Even in the United States, for instance, billionaires pay a lower percentage of their income as tax than millionaires do, but what is good about America is that there is a high rate of turnover among the composition of the elite. They keep changing. If you look at the names of the American elite from 100 years ago you have names like Rockefeller and DuPont, but now you have people like Elon Musk, who was an immigrant from South Africa or Steve Jobs, who was also the son of an immigrant, or Bill Gates and Mark Zuckerberg who were not from super rich families. If you look at the rich people in Pakistan today; the Habibs, the Dawoods, the Sehgals and the Manshas, they were very rich 50 years ago also. Of course, there are some exceptions, but those are exceptions that prove the rule.

If you look at any field in Pakistan there is hardly any upward mobility. Look at politics, the leader of my own party, Mian Nawaz Sharif. He has been very successful in politics, but comes from a rich and privileged background. So do the Bhuttos and Prime Minister Imran Khan. Other than Altaf Hussain, the vast majority of our prominent politicians come from very privileged families.

Furthermore, our top generals. Mostly, they have fathers who were also high-ranking military officials. So, if we think back to the story of the farmer and the horses, generals’ sons become generals, doctors’ sons become doctors, businessmen’s children become businessmen and so on.

Hence, our society lacks dynamism due to the lack of upward mobility. If you look at Ronald Regan, his father was a shoe salesman. Bill Clinton’s father was an alcoholic. Gerald J. Ford was an orphan. We don’t see people of such backgrounds at the top in our country. You don’t see the son of a mali (gardener), bawarchi (cook), or a driver doing well in Pakistan.

So, we limit our leadership to the elite few.

How does our elite sustain this? How does it succeed in keeping the masses down, in keeping with the colonial mindset? Well if we think about it, the armed forces of Pakistan are basically represented by two districts in northern Punjab, a few districts in central Punjab dominate the higher echelons of the bureaucracy, and in the last few years it is said that around 95 percent of the people hired by the Sindh government speak the Sindhi language to the exclusion of those 30-40 percent, who do not. But the barrier in Pakistan is not of an ethnic nature. The real barrier in Pakistan is that of the English language. English is the cleaver in our society. It separates the masses from the elites. How has this been sustained for so many years?  Well, primarily, it is due to our absolutely horrible education system.

Our education system is made up of three streams. One stream which is mostly public schools and some very low-priced, low-quality private schools (are) mainly in the lower-income areas. There, the kids go to school, spend or rather waste about five hours and then come back home. The kids in this stream are basically being trained to become poor members of society. Then you have the expensive English-medium schools. There the students are trained to become middle-class managers, professionals etc. and that’s pretty good. There are some exceptional students in this stream, who can go on and make it to the very top. And then there are only two schools, which provide the elite rulers across all of Pakistan; the Aitchison College Lahore and the Karachi Grammar School.

The first stream is basically not training people. You have 10th grade kids coming out of them who cannot write two sentences in any language and are functionally innumerate. For the past God knows, 50 to 70 years, we have been debating which language to teach our kids in? Every Chinese scientist has learnt science in Chinese, while in our elitist society if an actor speaks English badly or in a funny accent, he is lampooned. It is a weird society. And we sustain this privilege. So we have not been able to decide whether to teach Sariki or Sindhi kids in their native language or in Urdu or English. Then somehow we have decided that we are not really going to teach them science. We’re not really going to teach them math. And the — generally speaking — one percent kids, who go to America or England and come back to Pakistan, all the nice power positions are for them.

You have really smart people in Pakistan, who work as carpenters, bus drivers etc. In America, sons and daughters of bus drivers and cooks become professors and go on to win Field Medals and Nobel Prizes, while most of our kids are relegated to a life of unskilled labour because they simply never had a shot. So this is a weird society in the sense that it is absolutely a one percent opportunity society.

Since this was a talk on opportunity, I am going to end on a slightly positive note. I can tell you the secret of success in this globalized world. And this is not my secret. My father was a very rich man. I could have been a complete idiot — and perhaps I am — but given my background, it was sort of guaranteed that I would do well in life.

But for the rest of the world, what is the secret to success? Well, as most economists will tell you, it is about necessary and sufficient conditions, and education is still a necessary condition for success. You could be really smart, but if you are not educated, you will find it hard to move upwards. So, in Pakistan or anywhere else in the world, the only necessary condition for success is education. And the sufficient condition for success is also education, including in Pakistan, where you have no opportunities if you are not from the privileged class. If you educate yourself you will inevitably get ahead, even if you do not reach the very top, you will get ahead quite a bit.

This is the main issue in Pakistan. We do not impart serious education on most of our children, so if you need to get educated, you have to do it on your own. If this country is ever to become rich, or even middle-class, we need to educate our children but we are failing 99 percent of our kids.

Previous articleAid reaches Afghanistan for flood victims
Next articlePlant a Tree This Ramzan! 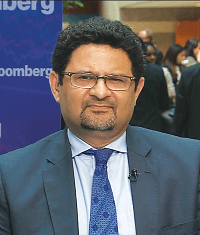