The Long Road to Peace

Prospects for peace are no brighter as 2020 comes to a close. The year saw some gruesome attacks — both by Daesh and the Taliban as well as the government security forces in coordination with US and NATO soldiers. People in large numbers were displaced internally, and many tried to reach various European destinations in search of a better living. The economy contracted further with unemployment jumping to more than 55 percent. Opium production soared in the face of grinding poverty. Expectations for a breakthrough in peace talks were not fulfilled. Despondency grew and widespread frustration became more entrenched in the psyche of most Afghans, young and old alike.

The year 2020 started on a happy note as, after months of negotiations, the US and the Taliban finally inked a landmark deal on February 29. The agreement envisaged the release of more than 5000 Taliban prisoners held by the government and some 1000 government soldiers held in custody by the Taliban. The agreement stipulated the Taliban would not allow any foreign militant groups to be deployed from or use Afghan soil in any form. The Taliban would also sever all links with outfits like Al-Qaeda etc. The time frame for the release of prisoners, as laid down in the agreement, was early March of 2020. But the process dragged on for months.

Soon in the aftermath of the deal, it was apparent that the Kabul government was not keen to implement the clauses relating to the release of prisoners, and so the release of prisoners took much longer than originally planned. The Afghan government tried to prolong the status quo by a combination of measures — all aimed at creating a stalemate. Disagreements on how to prepare an ‘agenda’ for talks surfaced as soon as the talks got underway. It took three months to resolve the ‘thorny’ issue of an agreed agenda for talks!

Now that an initial consensus on the agenda for talks exists, the two sides will look forward to addressing the core issues that confront the country. Each side has a different perspective on major issues.

The position of each side on critical issues facing the country:

The Taliban believe their government was removed back in 2001 by the US invasion of the country. They believe they have a claim to regain their position as a dominant partner in a government that would be committed to peace, harmony, and the socio-economic emancipation of the people within the framework of an Islamic governance system.

The Kabul government, on the other hand, asserts they are an elected body, having the mandate of the people, operating under a constitution and being supervised by an elected Parliament. These are, on the face of, it strong credentials for any government that claims legitimacy.

There are, however, ground realities that need to be considered in an attempt to dispassionately evaluate the current scenario. The Kabul government has control over less than 50 percent of the territory. The Taliban are in control of the ‘ungoverned’ area. Taliban control would imply that they collect taxes, administer the criminal justice system, look after such institutions as schools, dispensaries, rural roads etc. In some cases, when they travel through Taliban-controlled areas, the government convoys even have to pay taxes!

Rank and file Afghans are living under adverse conditions. Hundreds of thousands of Afghans are internally displaced. Thousands have left the country. Unemployment has surged beyond 50 percent. Millions live below the poverty line. Attacks by the Taliban and Daesh have seen an uptick in recent months. Government forces and the US air attacks on Taliban positions have also registered a sharp rise since the February agreement between the Taliban and the US. There is despondency all over because many have given up hope of an end to the conflict that has gone on for more than four decades since the December 1979 invasion by the former Soviet Union. In the long conflict, hundreds of thousands have perished and been wounded. Tens of thousands have become maimed, disabled for life. As many children have been orphaned. In the aftermath of the US invasion in 2002, non-depleted uranium was used by the US airforce in bombing the area.

The effects of the use of such cancer-causing bombs have been very severe. Hundreds of men and women have lost their sanity; thousands have been affected by deadly afflictions like cancer, liver and kidney diseases etc.
What do the peace talks hope to deliver?

After years of fighting in a war that has no objective and no end, the Americans have realised the Taliban are a legitimate political entity that has got to be mainstreamed in the country’s governance system if a sustainable peace can be ushered into the war-ravaged country. This realisation has come late in the day after terrible devastation and suffering. There is a compelling case for some soul-searching and some retribution.

In the backdrop of being recognised as a legitimate partner in any future dispensation, the Taliban today speak from a position of strength. The group is now in contact with Russia, China and Iran. All these three countries fear attacks by Daesh from their bases in Afghanistan. China is grappling with a revolt in Xinjiang which Beijing believes could be exploited by Daesh. Russia would not tolerate militancy creeping in from the Central Asian states and affecting peace and stability in the Muslim-majority areas of Russia. Iran also would like to block any Daesh incursions from Afghanistan into its eastern territory that borders Afghanistan.

Russia and China would both celebrate the exit of US forces from Afghanistan, and would portray that as a defeat not only for the US but a setback to its ideology as well.

All three of these countries are now convinced that only a Taliban-dominated government can defeat and annihilate a brutal outfit like Daesh, and indeed other such terrorist groups like the ‘Fidai Mahaz’ and the ‘Turkistan Islamic movement.’ Hence, these three countries would now like to see the Taliban in the saddle as rulers if their borders are to stay safe. Not only that, Afghanistan’s neighbours would benefit hugely from peace and normalcy returning to Afghanistan because they believe a massive reconstruction effort would be undertaken from which they would also benefit. For strategic considerations, these countries would like to see the US depart from the region as soon as possible. Russia and China would both celebrate the exit of US forces and would portray that as a defeat not only for the US but a setback to its ideology as well.

The talks currently ongoing in Doha, Qatar are expected to deliver some common ground between the Taliban and the Kabul government that could be the basis for peace and reconciliation. But there is a wide gulf between the positions of the two sides. The Taliban will not agree to be mainstreamed under the existing circumstances — acknowledging the legitimacy of the current government. The group believes the current regime and those which followed the US occupation of their country are the product of a system which has been brought about by alien occupation of their country. They claim the government is a product of an illegitimate occupation and has been sustained all these years by the presence of foreign forces. These are the reasons they don’t recognise the legality or legitimacy of the government in Kabul. On the other hand, the government would insist the Taliban join a unity government for ending the conflict.

The US and the Afghan government have been relentlessly stressing the need for a ceasefire. The argument they advance is that a cessation of hostilities would give them an opportunity to deliberate upon the issue of reconciliation, peace and harmony in a climate that is conducive to meaningful negotiations.

So why do the Taliban not agree to a ceasefire?

The Taliban do not accept the plea or advice for a ceasefire for two basic reasons. First, they believe their supporters are rank and file Afghans who are fighting for an ideology. If a ceasefire does not deliver and fighting is to resume, it will be nearly impossible to call such volunteers back and ask them to launch attacks. Secondly, they fear that any ceasefire acceptance would cause a split in their movement. Some believe a ceasefire offer is a stratagem to divide the Taliban movement.

As for Pakistan’s role in the Afghan imbroglio, many in the ranks of the Taliban have deep grievances and suspicions about Pakistan’s role as an honest broker. They believe Islamabad was a party to the US invasion of 2001 that toppled their government. They also recount how hundreds of Taliban activists were arrested and handed over to the US forces to be incarcerated in Guantanamo and Bagram etc. True or not, an unarguable fact is that many Taliban leaders continue to reside in parts of Balochistan with their families, and Pakistan leverages influence for getting these leaders to agree to talks and at times exerts pressure on them to get concessions from them. But there are limits to such persuasion or pressure.

Perhaps the only way out of the impasse is the establishment of a transitional government that comprises the Taliban and other factions, including government representatives. It will be a Taliban-dominated government brought about by a Loya Jirga or Grand Assembly for a specified period of time. For this to happen the current rulers will have to abandon their positions of authority. This they will not do unless there is real, strong pressure by the US, because, without the US and foreign assistance, the regime would not survive. This is the reason the Kabul government would like to block any settlement that comes at their expense. The Kabul government remains the biggest hindrance to any agreement with the Taliban.

Whether Washington will use its clout and put pressure on the Kabul government to see the ground realities and agree to create a transitional government that would deliver peace and an end to the uncertainty, remains to be seen. But the alternative is grim. Continuance of the conflict would not only devastate Afghanistan but also spread chaos in the whole region. 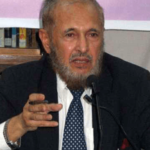 The writer is a former Pakistan Ambassador to Afghanistan.
Frontiers